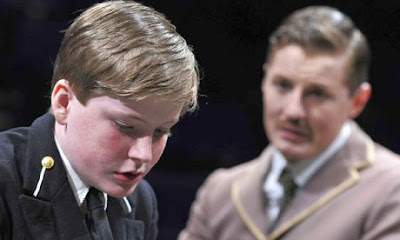 THE WINSLOW BOY
Understudy Run at the Old Vic Theatre
30.04.13

Not an easy ride for the understudies here; the central role of Winslow père [usually Henry Goodman] is wordy in the extreme; all credit to Nigel Carrington for suggesting so successfully the character of the man whose determination ruins his health, and all but splits his family. Everyone in the Old Vic felt for him as he stumbled at the final hurdle.
His son, accused of stealing the five bob postal order [a phrase which will mean nothing to today's 13-year-olds] was excellently done by Harry Tomes – a totally convincing performance, with strong support from Melanie Ramsey as his suffragette sister, and Samuel Clayton as his feckless elder brother, practising ragtime moves when he should have been studying. Sia Berkeley, who normally plays the lady journalist, was promoted to lady of the house; she gave a moving performance, torn between allegiances, anxious for her husband and her children.
The permutations became complicated after this, with cast regulars reading from scripts. Jay Villiers, who is normally the once-famous cricketer, now hapless suitor of daughter Grace, read the advocate, Sir Robert Morton, with aplomb and an impressive moustache – the crucial central cross-examination was excitingly paced, and compelling, even with script and understudy. Stephen Joseph, who's the photographer in the main cast, made a nicely awkward Curry, [his proposal scene very skilfully handled] and in a final attempt at confusion, was Grace's other suitor in Act Three !
Lindsay Posner's rightly praised production, with its solid set and atmospheric lighting, survived the potential chaos very successfully; as ever, it was good to see the understudies given a chance to shine in Rattigan's classic examination of class, feminism, justice and the fourth estate.
on Saturday, May 04, 2013