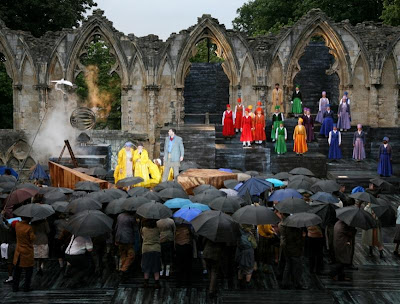 These Benedictine arches were old before the Mystery Plays saw the light of day. Like them, they've seen glory, decay, neglect and revival. They made the perfect backdrop to Mike Kenny's new version, the first to be performed in these gardens since 1988. On Press Night, only the second performance unaffected by summer rain, the trees and the clouds were tinged with pink for the Nativity, the ruins starkly lit against black for the later, darker scenes.

Kenny looks back to the first modern production in 1951 – when the four dozen individual scenes were first welded into a whole – and gives his world a cosy, retro look, inspired, he says, by Stanley Spencer. Lots of ancient bicylces, and topiary animals for creation, including a strawberry spider and, of course, a coiled serpent for Lucifer to hide behind. His Adam and Eve, in their innocence, are played by a young boy and girl, replaced when they taste the fruit by ashamed adults.

Strife and death run through the scenes. The Flood, with the traditional comedy Mrs Noah, is done with brollies, but there are drowned children when the waters recede.
The staging [set design by Sean Cavanagh] allows multiple traps, used cleverly as the doors in a busy Bethlehem, more sinister for the Massacre of the Innocents. The drab utility costumes of the people are nicely contrasted with the rainbow colours of the angels.

The huge crowds – superbly directed by Damien Cruden and Paul Burbridge - are effective in scenes like Casting the First Stone and the Harrowing of Hell, where the souls stream up to heaven like a Doom painting – no crowds, alas, in the Sheep and Goats Judgement, though. And there was little black humour in the Crucifixion scene – it's there in the text [the same vein that Tony Harrison mined for his Mysteries], but perhaps didn't fit with the violent, militaristic mood of this production.

Only two professionals on stage – Ferdinand Kingsley as a young, athletic God [later taking human shape as Jesus] and Graeme Hawley's smooth, oily Devil [and several of his works].

There were choirs and a brass band, too, adding to the challenge of stage-managing "the biggest outdoor production in the UK this year" [not counting Danny Boyle's Olympic opener, I guess]. The effect was stunning, alternating the epic and the intimate, and remaining remarkably true to the originals, not only in the language, but in the spirit of place, a dramatic declaration of faith for, and by, the people of York. 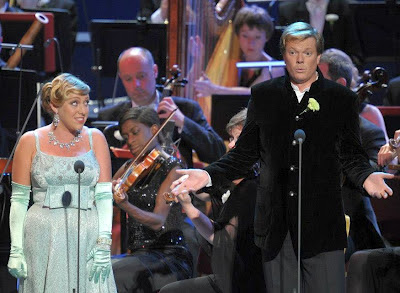 GLAMOROUS NIGHT
– THE IVOR NOVELLO PROM
The Halle at the Albert Hall
09.08.12

What would Ivor have thought ? A whole programme of his music, in the Albert Hall, on the wireless, with the Halle, no less.
It's not the first time his music has been heard at the Proms, though; the 1914 season saw two parlour songs …

We might have expected the Concert Orchestra with Barry Wordsworth, even Vernon Midgely, and Ken Bruce narrating. But no, no expense spared here, with the Halle, no less, Mark Elder [an Ivor fan, apparently] and the inimitable Simon Callow to sketch the life of this remarkably versatile, and incredibly popular, man of the theatre, honouring the tunesmith and matinee idol who dominated London's stage musicals in the 1930s and 1940s. And how well he did it, with anecdotes immaculately timed, making the vast arena seem intimate and cosy.

And there were nice touches, like the sofa, and the elegant evening wear. The vocal selections were delivered by Sophie Bevan and Toby Spence: a good sense of the period, though these are modern voices, of course, with no-one to recall the stentorian tones of Olive Gilbert in her prime.

A very entertaining evening, and oddly moving, too; a welcome addition to the ever-widening musical remit of the BBC Proms. 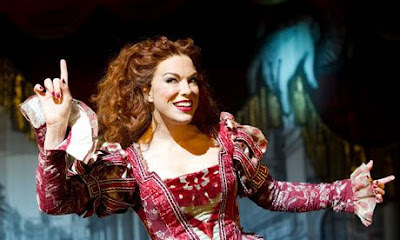 Trevor Nunn does Cole Porter does Shakespeare at Chichester this year. And the result is very stylish indeed, with the Pirandellian potential of the backstage drama beautifully brought out, I thought. The setting helped here – tired old 1950s wings – though the costumes, while in period, were bandbox fresh. The engraving backdrop was exquisitely echoed in hanging drapes which emerged, like so many charmed snakes, from big boxes.

Some of the most delicious moments were those ensemble pieces [not forgetting a show-stopping tap routine] that Chichester does so well – Too Darn Hot especially, led by Jason Pennycooke's Paul. The dance arrangements by Gareth Valentine allowed the hoofers full rein, including of course Adam Garcia's charming Bill, Lucentio to Holly Dale Spencer's Bianca.
But his was by no means the finest performance. Alex Bourne was a tuneful Fred, with just the right blend of charm and cheesiness, and Hannah Waddingham was superb as Lilli, the leading lady who almost leaves the greasepaint behind for her ambitious General [Mark Henehan]. And Hattie, Miss Vanessi's dresser, was given an outstanding performance, vocally as well as dramatically, by Wendy Mae Brown. The hoods duo of Clive Rowe and David Burt was very enjoyable, though I've seen more hilarious Brush-ups ...
This 24 carat production is over-wintering at the Old Vic – you could do worse than catch up with it there, though it probably won't match the pizazz of the Chichester thrust. 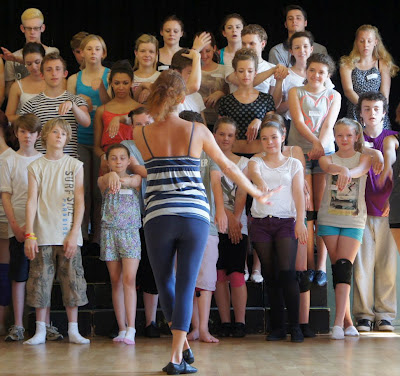 Gavin Wilkinson's West End Workshops provide a unique opportunity for young performers to work with professionals from today's musical theatre.
No concessions are made for youth or inexperience; no prisoners are taken.
Sunday's showcase began with Lost and Found – intense movement from a strong posse of young men, matched later by the girls, then the youngsters.
Helen Siveter, from the We Will Rock You company, brought us an edgy vitality in One Vision, with solos from Ollie Fox and Chester Lawrence. Alice Masters and Laura Messin duetted brilliantly in a number from Wicked, working with Stevie Tate Bauer; Rebecca Louis, a member of the last London Cats cast, developed an energetic Jellicle Cats, and Matthew Clark [Matilda] produced some off-the-wall choreography for Revolting Children.
All the numbers were delivered with confidence and admirable discipline, none more so than the finale, Cat and the Moon, involving all forty performers and developed in collaboration with them by Mr Wilkinson himself, who spent eighteen months in the West End Lord of the Rings.
His dance captain and right-hand woman for this week's workshops was Liz Pilgrim.
on Saturday, August 04, 2012 No comments:

A R Gurney's Love Letters – convincingly translated to the UK – charts a fifty-year relationship which often founders face to face, but flourishes in good old pen-to-paper correspondence. Mike and Sara Nower are the upper-middle-class couple whose schoolroom notes, invitations, billets-doux, thank-you letters [and one excruciating round robin] remind us of the days before texts and emails. He becomes a successful, and rather stuffy, MP. She an artist – her letters are enlivened by sketches of cats and dancing bears – and a depressive alcoholic. Lots and lots of letters, all sensitively delivered, without much rehearsal; the touching coda, written to her bereaved mother, is beautifully judged. By its nature this is a static piece, and it would have been helpful to see the two correspondents more clearly at their respective writing desks.

After the interval – bar down the road at Russell's – an enjoyably uncomplicated excursion into sitcom territory – What's for Pudding by David Tristram. The laughs came thick and fast in a very slick production, featuring Jo Gent as the bored housewife with "Maverick" on her tee-shirt and Roger Saddington as her accountant husband. Neighbours Alan Ireland and Helen Quigley bring sad news of the demise of Samson the budgie; Matthew Jones thumbs through the Kay's Catalogue for a pair of trousers [this is 1990]. Quality entertainment.

Studio directors were Joanna Poole and Helen Quigley.
on Saturday, August 04, 2012 No comments: