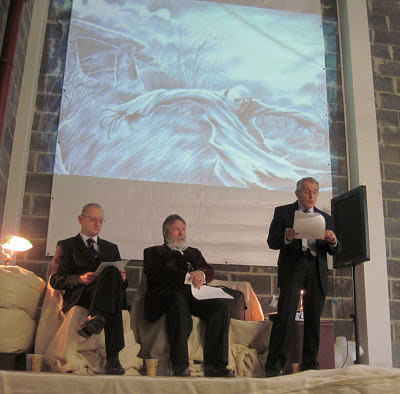 THE UNQUIET DEAD
Chelmsford Ghost and Phantasmagoria Society at the Ideas Hub
04.05.13

The Ideas Hub, on the site of the old market and the recreation grounds opposite, has a temporary life as an arts and performance space until a commercial tenant opens the long-promised café with views of Bell Meadow and Sky Blue Pasture.
Danny Segeth curated a spine-chilling evening on the sofa, in the company of author Roger Johnson, and his two actor accomplices, as they read three of his acclaimed stories of the supernatural.
Love, Death and the Maiden was a gory tale of sapphic vampirism on the eve of the Second World War. A playwright sends her "assistant" in search of the sadistic Countess of the Carpathians, hoping to "make the past come alive" with first-hand research. She never returns, succumbing to the fatal embrace of the Iron Maiden.
The other two stories both feature archaeology: The Scarecrow has a stone circle – Hell's Gate, with the scarecrow of the title standing sentinel. Read with relish and lovely rustic accents by Peter Nerreter. I particularly enjoyed the description of the country inn, with its rabbit pie, port and pipes, and the vision of the scarecrow's ghastly appearance.
Jim Crozier read The Dreaming City, the story of shape-shifting structures in Mongolia, and the awful fate of those who sought to explore them, led by archaelogist Howard, who runs mad at the last, leaving a cryptic diary as the only witness. We knew there was no hope for them as soon as he'd written "All slept soundly; no bad dreams at all" …
on Saturday, May 04, 2013