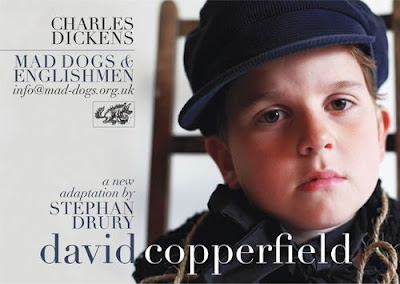 DAVID COPPERFIELD
Mad Dogs & Englishmen at the Civic Theatre
21.06.12
Jim Hutchon was in the Civic stalls ...

This production is a series of well-chosen and highly evocative snapshots of the rollercoaster rags to riches to rags to riches existence of David Copperfield – with a more than passing nod at its autobiographical seeds.

The insights into scenes and patches of narrative give full rein to Dickens' lyrical sense, and the two actors brought the few characters they chose to portray into full-on technicolor. I especially liked Ann Courtney’s 'umble and menacing Uriah Heep who ran a shiver down my spine. Equally clever was the exchange between Steerforth and his hapless love-rival Ham Peggotty, engineered to perfection by Stephan Drury with the assistance of a cane and a necktie.

The set was a simple but memorable arrangement of ropes and spars and worked well to give backgrounds to the many interiors of the production. And suitably morose music set the mood for the many ups and downs of the characters.

But I wouldn’t want any child to leave the theatre thinking this thing of glimpses and snatches has given them insight into the rich kaleidoscope of Copperfield – and even the director recommends they go home and read the book for the full experience. 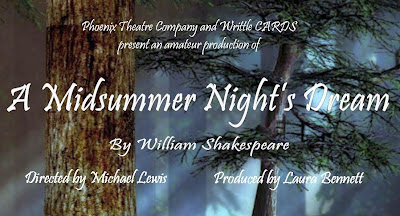 Shakespeare would have known and loved local amateur dramatics.
Nowadays, village productions of his plays are rare, thanks to waning enthusiasm and higher audience expectations.

So good to welcome this joint effort, directed by Michael Lewis.

Plenty to enjoy, in a version lasting only just over two hours including the interval, with a choice of customized punches. And I don't mean just the hiccups and the wardrobe malfunction when a cummerbund went the way of Thisbe's mantle, to the audible delight of two ladies in row F.

The crew of patches, led by Syd Smith's Quince and Geoff Hadley's Bully Bottom – nicely dressed as tradesmen – came into their own in the excruciating rehearsal and the chaotic "show" – Chris Wright's nervous Flute a particular delight.
Neil Smith and Kenton Church played the testy rivals, their lovers were Leila Francis, who also assisted the director, and Laura Bennett, whose characterization – jealous, frustrated, tearful – was excellent. I liked the way their "weeds of Athens" got more and more distressed during that eventful night in the woods. Other stand-outs in a large cast were Daniel Curley's irate Egeus and Jean Speller's beautifully spoken Titania.

This ambitious undertaking, supported by the RSC's Open Stages scheme, boasted an atmospheric forest, designed by Les Leeds, and some very young apprentices – playing the fairies, mothered by Sarah Wilson's Merry Wanderer, but also lanthorn, dog and Philostrate – shared by cleft-apple twins. The Bard would surely have approved.
on Thursday, June 28, 2012 No comments: 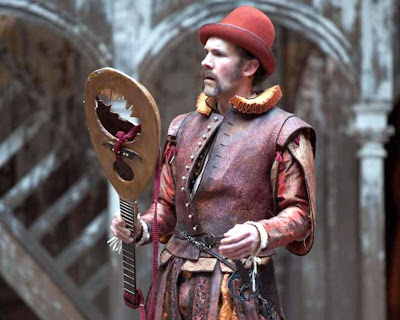 Christopher Sly – too often absent altogether in modern productions of the Shrew – is a very forceful presence at the start of Toby Frow’s bold production for the Globe.
Crucially, he links the 21st century crowd of groundlings to the period action of the play, and once he’s convinced he’s a lord, he joins them for the first few scenes, though for reasons amply apparent as the drama unfolds, he does not make a return visit at the end.
The main event is traditional in approach, fresh and fast-paced, with some memorable performances.
In her Globe début, Samantha Spiro makes a compact but frighteningly feisty Kate. She’s perhaps best known for being Barbara Windsor [whose shade is not entirely absent here], but she makes a superb shrew, even if her change of heart, beautifully delivered, is not especially convincing.
Her Petruchio is an amazing tour de force from Simon Paisley Day.
Strength, stillness and silliness combine in a very watchable turn; his wedding apparel has to be seen to be believed.
Among many other joys, Pierce Quigley’s grumpy Grumio, wearily following his master around with a bucket and a pair of coconut shells. Original practices indeed.
on Thursday, June 28, 2012 No comments: 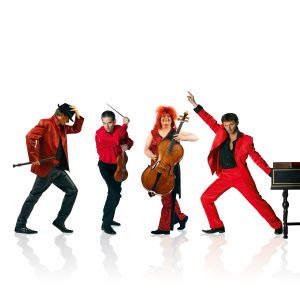 Red Priest's distinctive brand of baroque is perhaps a little too in-your-face for the staid surrounding of Thaxted's magnificent church. Tim Kliphuis a year or two back probably as far out as most would wish to go.

But they gave two excellent sets, and some of us at least stood for the ovation at the end.

Fronted by that inimitable magician Piers Adams, they played many of their greatest hits, including Bach's Third Brandenburg, his Toccata and Fugue, on a variety of recorders, and an Argentine-influenced Albinoni Adagio.

Spring, from the Four Seasons, complete with birdsong and a stray dog, on this unusually fine June evening, a meeting of Zadok and Sheba, and Tartini's Senti Lo Mare, from their Pirates of the Baroque CD. 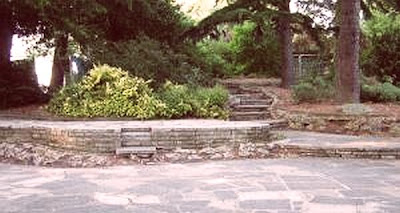 For Shakespeare and his contemporaries, a "winter's tale" was a story of spooks and goblins, best told around a roaring fire.
As the Romford wind whipped up from the lake, rustling the shrubbery and snatching the words from the actors' mouths, I dreamed wistfully of that Tudor hearth.

This Winter's Tale was the 51st production for the RST; it was an introduction to Shakespeare, and to acting al fresco, for some of the large cast. Must have been chilly for them, too, and picking up cues was clearly a problem. There seemed to be a feast toward in the musicians' tent, but their lovely music was too often stolen by "each wind that blows".

But the show, directed by Wendi Sheard, is an assured, dynamic telling of this often dark comedy, helped by the atmospheric sylvan setting – comparable with Regent's Park, I thought – "where God paints the scenery", as the old song goes. [One bonus is that we can see background action, almost off-stage.] And immeasurably enhanced by bold, nuanced performances in the key roles.

Victoria Abery is a radiantly smiling Hermione at the start, excellent in the courtroom, convincing even as the statue, in a gorgeous gown. Her advocate, Paulina, is beautifully characterized by Lorraine Ely; her jealous king, Leontes [Simon Drake], who "too much believes his own suspicions", is resplendent in brown and gold, confident, and always clearly audible in his soliloquies. And moving, when, a broken man, he collapses like a child on the rockery steps. His "brother" Bohemia is a blunt Rob Morley.

The young lovers, in the sunnier second half, are Jake Portsmouth, speaking the verse very persuasively, with Melany Dantes-Mortimer as his pretty Perdita.

Amongst the score or so other characters, mention must be made of Roy Hobson as the cupbearer Camillo, Morgan Simmonds as the "gallant child", Nick Lupton as a cheeky wide-boy Autolycus, and Jim Rimell's entertaining double as a fantastical Father Time, with his hourglass, and a voluble Steward, surely some kin of Malvolio. The lighter people – a pair of fleece-clad clownish shepherds – are cleverly contrasted: David Lintin's rustic father and Solomon Akano's streetwise son.

By the time Leontes found the painted statue "warm", we were so frozen as to be almost past caring, but we sat stoically till the curtain call, the whole cast, almost outnumbering the audience, stretched across the Raphael Park rockery, with a witty final nod to the famous Bear, fatal pursuer of John Lester's Antigonus.
on Monday, June 25, 2012 No comments:

LILIES ON THE LAND 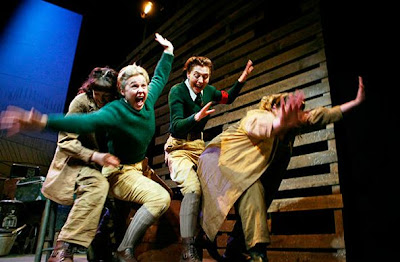 LILIES ON THE LAND
Fresh Glory Productions and The Lions Part at the Mercury Theatre Colchester
21.06.2012
for The Public Reviews

This intriguing documentary piece, skilfully devised from letters, diaries and reminiscences, is the story of the Land Girls, many of them still in their teens, who toiled in England's fields while the menfolk were fighting the Nazi foe.

The "hook" is the death of Churchill, years after the conflict ends; it becomes clear to us, as it did to the Lions Part when they asked for recollections, that those years in the country remain fresh in the memory, with their highs and their lows, told almost randomly, with natural hesitations and muddles. All punctuated by radio broadcasts to signpost the progress of the war. The genius of this show is to breathe life into the many anecdotes and accounts, often trivial or banal in themselves, and give them new significance and emotional power.

Jane Linz Roberts gives the four actors a pastoral, almost idyllic backdrop, as if seen through barn doors, with wooden side pieces and paraphernalia suggesting the busy farm.

The music – always a trigger for the memory – is certainly evocative, though the best known pieces stray dangerously close to cliché. It is beautifully sung, a cappella, by the four girls. Most effective, for me, were the satirical pastiches – If You Want To Go To Heaven, and Old Gang Labour – and the pin-drop moment where Silent Night drifted through the winter dark, with German and Italian mingling with English words.

Their characters are neatly defined. No surprise, perhaps, to find a salt-of-the-earth East Ender [Kali Peacock, superbly droll and very touching in her honesty] and a cut-glass lass from the upper crust [Sara Finch], who between them garner most of the laughs. A bank clerk, a Northern waif, beautifully drawn by Catriona Martin and Kate Copeland, complete the quartet. They all pitch in, playing everything from foreman to Italian POW, and collaborating to tell the stories of ploughing, calving, lambing, milking and harvesting. We see them eagerly unpack their uniforms – not as flattering as in the poster – flirt with the Yanks and act out their own version of Bandwagon's Chestnut Corner.

There are darker moments of exploitation and abuse, but many of these memories are fond, and very funny: the mouse down the cleavage, the field latrines.

"You had to be there to know," they said. But this moving tribute, now ending a two-year run, is an inspired way of remembering the Forgotten Army, and its vital role in our island story.