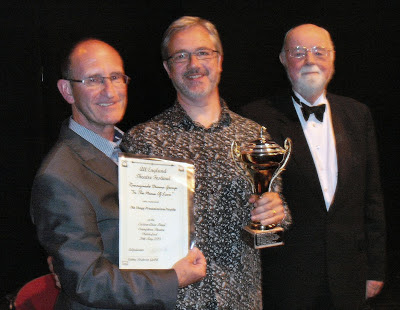 A rare chance to see, in Chelmsford, two one-act plays vying for a place in the England final.
The two pieces had much in common: both two-handers, both depicting a man and a woman in unconventional circumstances, both original plays which involved the author in the production.
First, Runnymede Drama Group in Susie Kimnell's In The Name Of Love. Set in a shabby US motel [the excellent set by John Godliman won the special Stage Presentation trophy] it featured a remarkable performance by Kimnell as Bethany, trapped in an abusive relationship, with Paul Foster as the man she's been with for ten years. We are in Blackbird territory here, and the difficult theme was uncompromisingly but sensitively handled by director Judith Dolley.
Housebound, written and directed for Stretch Theatre Company by Simon Mawdesley, was a much more light-hearted piece, though the situation was far from comic, with Caroline Petheridge's Fiona bound and gagged in her suburban home by "not much of a tough guy" Martin Bedwell. Plenty of suspense, immaculately timed dialogue.
Almost impossible to choose between two such different pieces. Fortunately that task fell not to me but to Arthur Rochester, who sent Housebound through to the Final in Dorset.
on Wednesday, May 29, 2013