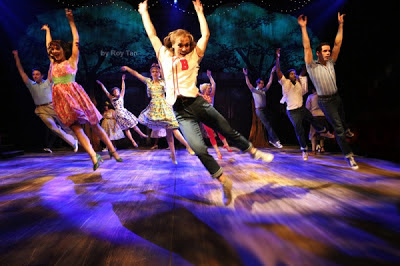 THE PAJAMA GAME
at the Minerva Theatre, Chichester
25.05.13

This gem from 1954 was a museum piece almost as soon as it appeared.
Some great songs, only loosely connected to a thinnish plotline. Some deliciously old-fashioned routines – "I'll Never Be Jealous again".
Its one nod to the cutting edge, a storyline which mixes labour issues with love interest. 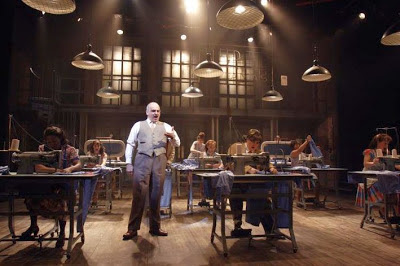 But of course this is Chichester, for whom reviving musicals is second nature, stock-in-trade. And Richard Eyre's Pajama Game does not disappoint for a second.
The Supervisor and the Union Rep are engagingly done by Hadley Fraser and Joanna Riding, both of whom understand how classic musicals work, and effortlessly combined vocal, dramatic and hoofing skills. A strong company also includes Chichester favourite Peter Polycarpou as Hines, the time and motion knife-thrower and Clare Machin as his secretary. A nice double from Colin Stinton as Hasler the hard-man boss, and Pop, a veteran railway worker.

Gareth Valentine is in charge of the music, and also gets to join in for the curtain calls, and Stephen Mear is the choreographer: amazing work in the tap-dancing Steam Heat, and in the impossibly energetic Once A Year Day.

This show is in the smaller Minerva – the main house won't re-open till 2014 – but we're promised a pop-up in the park for the big show of this year's Festival, Cy Coleman's Circus musical, Barnum.
on Thursday, May 30, 2013