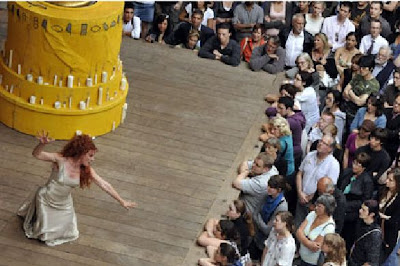 HELEN
McGuinness/Euripides at Shakespeare's Globe
23.08.09
The clear counter-tenor of William Purefoy fills the Globe again – this time he is the Singer – chief of the chorus - in Euripides' Helen, ancient Greek drama in a new version by Frank McGuinness.
McGuinness's is a demotic voice, with cliché, phrase and saying studding this light-hearted tragedy.
Not so tragic, then, since this Helen has nothing to do with the Trojan War, as she is at pains to point out. A marvellous performance from Penny Downie, clearly spoken, deeply felt, with exemplary comic timing.
Her scruffy survivor Menelaus was played with energy and dignity by Paul McGann.
A mixed bunch of a supporting cast included Rawiri Panatene as the swaggering, gullible King of Egypt, and Penny Layden as a xenophobic gatekeeper with a heart of gold.
This year the Globe crew are sporting tee-shirts with a “scenery-free zone” message. But this show, like many of the others, has been fully designed: here there's a massive palace wall, with a spoil heap and a ladder round the pillar. All adding almost nothing to an already colourful production.
Can we have more work for our “imaginary forces” next year, please ?
on Monday, August 24, 2009 No comments: 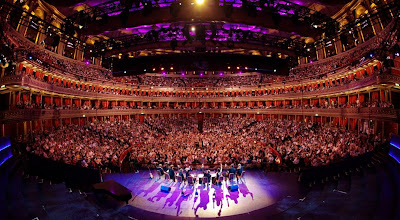 THE UKULELE ORCHESTRA OF GREAT BRITAIN
Late Night Prom at the Albert Hall
18.08.09
As Hey Jude kicked in, a couple of brave souls waved lighters in the air. A few more tried the more up-to-date mobile phones. Then, suddenly, it was ukes. Ukuleles of every shape, size and plumage, swaying to the Mélange of the first encore.
Almost every other prommer seemed to be clutching an instrument case: strumming in the long queues, chatting in the bars and corridors.
Good to see a late night sold out, with Arena fairly packed too, and a lusty cheer from the Gallery.
The Ukes programme included many old favourites. It began, appropriately for radio, with Puffin' Billy. A nod to the Proms brand with a low-key Jerusalem, and the interactive highlight, Beethoven/Schiller's Ode to Joy with all 1000+ amateurs strumming along. Strangely muted, I thought, though surely not through modesty. But still very potent, a magic moment of communion in this vast Village Hall.
There are calls for this to be an annual event. But surely we should be looking for something just as off the wall for next year. I don't suppose Nige would lead five hundred grade three fiddles in “Summer”. But Rolf Harris is 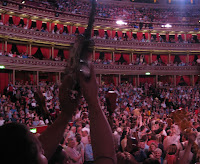 very popular, and would certainly pack the Albert Hall. Dust off your didgeridoo, dig out that Stylophone …
on Friday, August 21, 2009 No comments: 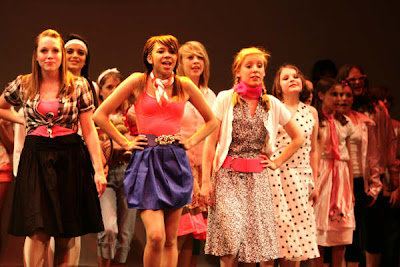 GREASE
Tomorrow's Talent at Little Waltham
02.08.09
image from this year's Civic Theatre Show
"Don't Tell Mama"
The last time I saw Grease in the West End, I was struck by how bloated and coarse it had become.
No such complaints with Tomorrow's Talent, who filled the hall with Pink Ladies and Burger Palace Boys, singing the songs and telling the story in sixty energetic minutes: a lean, organic high school musical.
Joe Toland brought his considerable experience to Danny, and also worked as assistant director in the unbelievably tight four day rehearsal period.
Just as outstanding was 14 year old Emma Bennett as the clean living Sandy, brilliantly selling her songs with no mic, no lights, in this scarily intimate arena.
The young performers ranged from 8 to 18, from 3 foot something to 6 foot plus, and every one of them gave their all for Rydell High. And many of them had done “Fame” the week before !
Special mention for Alex Houlton's rangy Kennickie, Catherine Hale's pink-haired Frenchy, and Jess Moore's powerful Rizzo. Greg Bennett was a stylish Doody, and slipped into a halo and wings for a nicely delivered Beauty School Dropout.
While it did not exactly avoid “tasteless and vulgar movements”, the staging was packed with bright ideas, the tyres in Greased Lightning just one instance.
Grease was directed by Gavin Wilkinson, with Dance Captain Liz Pilgrim and karaoke MD Kris Rawlinson.
As well as their annual summer schools, Tomorrow's Talent, now entering their sixth successful year, run musical theatre classes every weekend during term time. 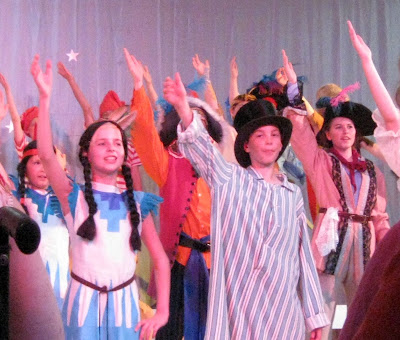 PETER PAN
CYGAMS Summer School
at their Meteor Way HQ
01.08.09
This was Young Gen's 23rd
Summer School, an almost instant show which gives a large company a taste of the limelight, and two casts a chance to shine.
A week ago none of them knew which part they'd be playing. The lively, entertaining production we saw was achieved, unbelievably, in just five and a half days.
As director Ray Jeffery said, it's not just about learning theatre, it's about camaraderie and supporting each other.
The afternoon show went much more smoothly than anyone had the right to expect. Some of the lost boys [and girls] were only eight years old, for some this was their first proper show – a real baptism of fire.
Guy Sullivan characterised all his roles well, especially perhaps his Indian Chief, and Holly Escott made the most of Tinkerbell's wordless mime. Bart Lambert was a plummy Etonian Hook, swapping roles in the evening with his equally confident sidekick Starkey [Sam Toland]. Charlotte Broad brought poise and understanding to Wendy, and Catherine and Patrick Gray were the most convincing middle-class Edwardians. Henri de Lausun never missed a laugh as the non-conformist Smee.
Callum Crisell made Peter a somewhat troubled teen, but held the stage well and gave 110% to all his numbers.
Bryan Cass was the Musical Director, and this special adaptation of the 1954 classic was conceived and directed by Ray Jeffery. 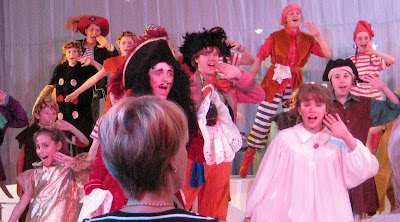 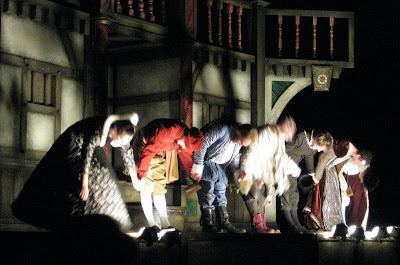 TWELFTH NIGHT
The Lord Chamberlain's Men at the Greville Theatre Club
31.07.09
“Oberon”, just in front of us, had bottled ale, a popular tipple for Tudor playgoers.

Not so sure about the Malvern Water, the Mumm and the Moet. But there was no mistaking the festive nature of this memorable evening.
The Greville Theatre Club had decided to celebrate their 50th birthday by getting someone else to do the entertaining. They went for the best of the touring players, the Lord Chamberlain's men, an all male troupe taking Shakespeare to historic settings.
This year's production is that “improbable fiction” Twelfth Night. As we saw at the Globe a few years ago, this play especially gains from having boys play the girls. Shaun McKee as Viola soon dons the breeches for Cesario, and we relish the double confusion. The wooing scene was superbly done here. Only seven players, so some impressive doubling: Mawgan Giles, for example, managed both Orsino and Maria ! Mark Martin was an upper class twit of an Aguecheek, as well as Sebastian, and Tom Micklen was Antonio, the captain, and a hippy-ish Feste, who sang to his pipe to start the show, and brought a mellifluous melancholy to its close. Malvolio [Paul Brendan] wore a silly hat and a pained expression, with Joe Marsh as his mistress Olivia. The coarse Belch was played with some restraint by Conner Williams.
The verse speaking, and the complex plot, were commendably clear, with many of the less comprehensible lines cut, and the three levels of the portable stage provided good sight lines and swift entrances and exits. The extra songs were relevant and robustly performed.
Martins soared overhead, the church bell tolled the hours as evening fell. This ancient space, bounded by the barn which is the Greville's home, the church and a row of cottages, made this fine production a very special occasion for those of us lucky enough to be there.
Twelfth Night was directed by Andrew Normington. 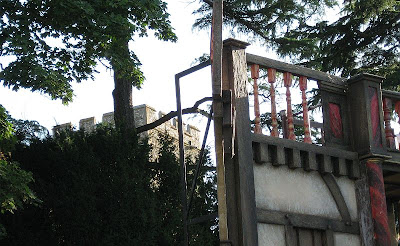