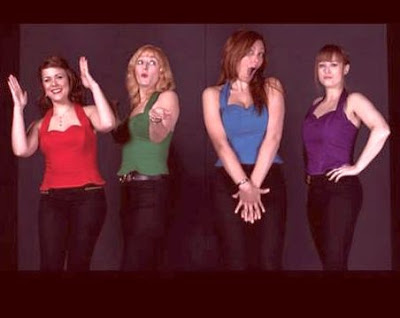 
Fun. Some Nights. Pink. Raise Your Glass. A fresh new look for Shakers in Joe Kennedy's production, with dance routines to set the mood and the ambience, all devised by the girls - Catherine Hitchins, Gemma Robinson, Helen Quigley and Caroline Wright.

Like the better known [and, frankly, better] Bouncers, Godber's 1985 piece has its four actors play not only the jaded waitresses in the glitzy cocktail bar, but also their lairy customers – lads on the pull, telly folk, couples dining, shopgirls celebrating a birthday. As well as the bar, the dance floor and the kitchens, we peek into the changing rooms at River Island, and eavesdrop on a fraught auditions. And, in soberer moments, soliloquies sharing the secret thoughts of the Shakers girls.

Laura Bennett was there for the Chelmsford Weekly News:

Following the resounding success of CTW's excellent production of Bouncers last year, Artistic Director Joe Kennedy has chosen to produce John Godber's all-female follow up this season. Structured similarly to the male version, an almost bare set houses a cast of four actresses who play the waitresses at "Shakers", as well as the cocktail bar's various male and female customers. Jaded to varying degrees by the clichés involved in selling a never ending stream of "Slow Comfortable Screws", the ladies' weary smiles and feigned politeness are coupled with a collection of witty asides and touching monologues developing a core of well rounded characters.
Catherine Hitchins' acting skills were matched by her evident dancing ability. Both Caroline Wright and Helen Quigley shone in their emotional monologues. Gemma Robinson proved herself an accomplished all-rounder, superbly expressive with a natural flair for comedy.
It is difficult not to make comparisons with Godber's original Bouncers script, and Shakers never quite lives up to the quality of the male version. The humour is far subtler than the unrelenting, insightful, laugh-out-loud comedy written for the men, and despite some lovely moments from the tight-knit cast there were times where the slick pace started to waver.
Director Joe Kennedy and assistant Jacob Burtenshaw were clearly inclusive and collaborative in their approach, benefiting from the perspective and skills that the company could contribute. The result overall achieved another entertaining and enjoyable production from CTW, who change the tone for their next show with political drama Frost/Nixon.
on Monday, May 20, 2013

Not terrible but poorly, poorly cast. Did anyone tell the director(s) these girls were meant to be in their late teens? Obviously not.