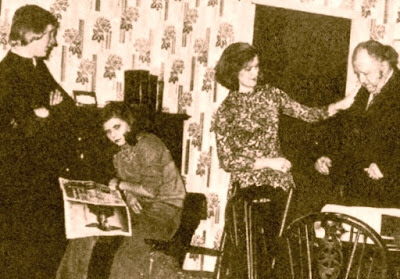 John Peregrine’s production of Spring and Port Wine, seen last week at Little Baddow, had several points in its favour – a good set, cramped but well dressed, a practical scullery tap and an even cast. Robin Warnes, as the elder son, was particularly convincing, and John Cowan made something of the complex character of Rafe Crompton, a formidable Bolton paterfamilias. Mike Smith and Gill Bright gave lively performances as the two youngsters.

Unfortunately the production lacked cohesion; the first act, largely character and plot, was very dull, and the set piece speeches desperately needed more variation of pace and tone. And there is also a fundamental Northern spirit, movingly captured in plays such as this, which is rarely understood by “foreigners”, amateur and professional and the absence of it meant that no amount of factory hooters and flat vowels could give credibility to the story.

For example, the scene where the whole family sings Handel’s Largo went for nothing. As one of the characters says. “It’s funny how you never hear families sing nowadays.”