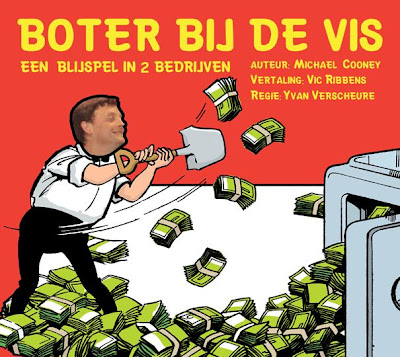 CASH ON DELIVERY
The New Venture Players at Brentwood Theatre
24.11.12

An everyday story of death, benefit fraud and cross-dressing by Michael Cooney, son of the more famous Ray.

Not a new play – we have a mobile and a trimphone in uneasy coexistence – but seems much older, with Carry On jokes and the sort of farce Orton, Bennett and Frayn had mocked years earlier.

A perky brass theme, torrential rain, and ten minutes of solid plot-laying before we're into a morass of mistaken identity, improbable twists and manufactured mayhem typical of the genre.

I've never seen this professionally done. But it seems to me you need two things to make it work, to have the audience helpless with laughter. "Solid oak doors", rather than passageways, and a frantic pace, built and sustained through the set pieces. It only takes a moment's hesitation or stumbling to kill a scene.

There were some strong performances in Fred Sampson's uninspired production: Roy Hobson's fussy little Mr Jenkins understood his character and its function, as did Phil Foster as Dr Chapman. Richard Spong, as the young lodger who's the unwitting centre of the scam, had commendable energy, and Chris Wilkins did what she could with the one-dimensional wife. And Vernon Keeble-Watson, as the "sweet old man" Uncle George, gave an outrageous performance, and got the biggest laugh with his perfectly placed pocket handkerchief.

Butter for the fish, it's called in Dutch ...

At Brentwood this week, Arsenic and Old Lace - with the all-important window seat under the actual window, this time ...
on Friday, November 30, 2012 2 comments: 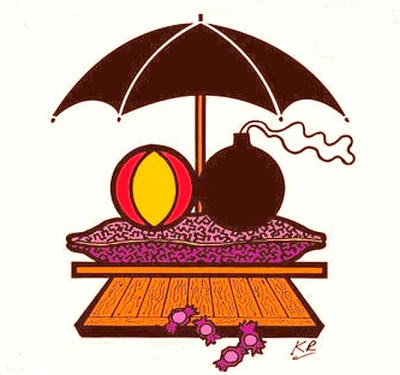 Another classic drama from Little Baddow, with the admirable production values we have come to expect at the Memorial Hall.

The Grosvenor Square drawing-room is skilfully suggested in a set which is solid, convincing and beautifully dressed. The characters are generally well costumed, too, with some stunning outfits for the Aunts.

This adaptation of a short story is not The Importance, of course, though we are reminded of it in the opening moments, when Arthur is overheard at the piano by his manservant. These two roles were excellently played by Martin Lucas, nice but dim, with expressive features and body language, and James Oakley, erudite and unflappable, with scene-stealing sideburns.
Sarah Trippett-Jones gave us a lively, flirty Sybil, and there was strong character work in support from repertory actors Paul Randall – a saturnine palmist – and Ken Rolf – the doddery Dean of Paddington. Grandes dames aplenty, including an imperious Vicky Tropman and Gill Peregrine as an annoying Aunt. Not forgetting Jake Hawkes as the incompetent anarchist. 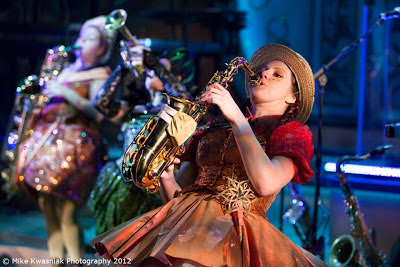 Princess Susie ?
Well, if you're a Rock 'n' Roll Panto, the cue for a song must have been just too hard to resist.
This is the twelfth in the Wolsey's smash-hit series, and, like all good panto houses, it has developed much loved tropes and traditions: the chorus of critters, the lame rhymes, the jokes at the expense of Norwich City, the visual puns ["Baby Bouncer"] and of course the superb actor musicians who play all the instruments and all the familiar roles. With the usual "gratuitous cover versions of golden oldies" – well, they said it …
Diego Pitarch, who's also designed the costumes, has given us a beautiful pop-up storybook set – sparkly clocks a feature, with gothic details and an ingenious alcove upstage. Plenty of room for the musicians, too, and for Ally Holmes's lively choreography.

Good to welcome back Will Kenning back for his third year in the frocks – he's Dame Taffeta Trott this year, bringing his irrepressible energy and sense of the ridiculous to the role, with manic, breathless pace and not a hint of campery.
Springing up through proper stage traps, the two fairy forces for good, Esther Biddle's assertive Fairy Fanciful – a bit like a jolly headmistress – and her apprentice, Frederica, wonderfully characterized by Sarah Mahony, with her youth-speak, her boots and her boater. On the dark side, we have Karen Mann's malevolent Morgana, voice like a buzz-saw, making a spectacular upstage entrance and her spoilt son Mordred, OTT and charmless, he nonetheless gets his own high-energy number to sing – a memorable villain from Steve Simmonds. Michael Paver, blowing his own trumpet, is Harold the Herald, and Sean Kingsley wrings every last drop of character from King Candlesticks Camelot. Vocally impressive, too. Simon Steadfast, our likeable, honest hero is played with considerable charm by Peter Manchester. Lilly Howard is his Susie, looking lovely in her Lulu outfit and singing beautifully, notably in "My Guy".
Like Matthew Bourne's new ballet, this Sleeping Beauty is set in Victorian times; then, after a hundred-year interval, we wake in the Swinging Sixties; cue for some loving recreations by wardrobe [Taffeta's geometric dress] and for plenty of those chart-topping standards, plus one or two wild cards: Under the Moon of Love, brilliantly sold here by Kingsley and Kenning, which might have been totally forgotten were it not for Showaddywaddy ...
Everyone of the ten-strong company has a moment in the limelight – even Domestos/drummer Kieran Bailey, with his farting sink-plunger. The sound effects – another tradition – superb as ever.
"Celebration", "Wake Me Up Before You Go Go", "It's In His Kiss", "I'll Be Watching You", "Brand New Bag", the Dame channelling Chaka Khan, Morgana on glocks, Sprite Frederica on flute, and before we know it we're onto the name checks and the party-mix finale. The audience loved every minute – babes in arms, wolf cubs in the front, Novotel at the back, and good sport Terry in row D.
Sleeping Beauty written by Peter Rowe and directed by Rob Salmon, with Ben Goddard in charge of all that music, is at the Wolsey till almost the end of January, with more than seventy shows still to come for this gloriously unique panto company. 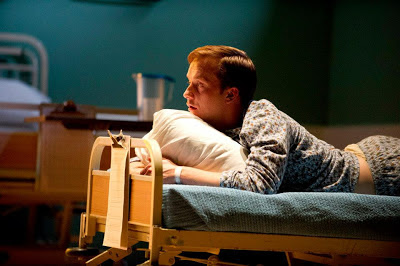 OUR BOYS
understudy run at the Duchess Theatre
20.11.12

These are the heroes who still rely on our help, twenty years after Jonathan Lewis wrote his angry, funny drama.

It's actually set in the 80s, in the joyless, drab surroundings of Bay 4 in a military hospital in Woolwich.
We get to know very little of these men as soldiers, so we can only guess what they are like in the field. In the ward, they are excellent wind-up merchants, whose resentment at being saddled with a "Rupert" – an officer – in one of their beds is tempered by the endless fun to be had at his expense.
As the drama unfolds, we delve deeper into these assorted characters, and share their frustrations, their fears and their laughs in the enforced intimacy of the hospital. We see no women – Hatchet-Face a formidable off-stage presence only – and no staff, except the orderlies who come on for the scene changes. This gives a palpable sense of isolation from the world, made worse in hindsight by the lack of mobile phones and the internet. Contact magazines …
Jolyon Coy is excellent as the outsider – unsure of himself, of his vocation, desperate to fit in as a man, not just an officer. They will keep calling him Sir, despite the joshing and the obvious dislike of all he stands for.
Lewis Reeves gives a brilliantly touching performance as Ian, who is the most obviously affected by his injuries, but who, predictably perhaps, makes the most complete recovery. Mick, superbly slow on the uptake, was Matthew Lewis.
Of the understudies we saw, I was particularly impressed with Matthew Forsythe's angry Ulsterman Keith; Edward Grace was very convincing, too, as Parry, deprived of his toes and a chance to join the paras. The play ends with a heartrending speech from the outwardly confident Joe [understudy Sam Nicholl], who survived the Hyde Park bombing with just a finger missing, but who will bear deeper scars for the rest of his life.

Lewis saw a military hospital from the inside, and the piece burns with authenticity, both in the banter and in the blazing anger. These men, we feel, will never recover from their experience of warfare, and the Army, a family to them, and the real villain here.

This impressive revival runs at the Duchess till December 15. Various deals available; well worth a look.

Email ThisBlogThis!Share to TwitterShare to FacebookShare to Pinterest
Labels: duchess theatre, OUR BOYS 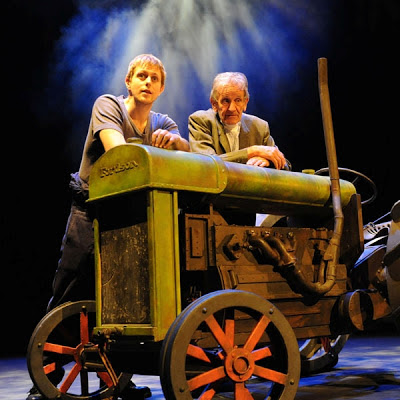 FARM BOY
at the Mercury Theatre, Colchester
18.11.2012
for The Public Reviews

Farm Boy is Michael Morpurgo's sequel to War Horse, and tells the story of the boy who came back from the Great War, saved Joey from the horse butcher, and ploughed with horses until one May Day in Iddesleigh ...

Daniel Buckroyd's clever adaptation of this gentle tale is simply staged: a bare bulb, a chair, serving as horse and plough as well, and a vintage green Fordson tractor centre stage. It's a special tractor, this, tucked away at the back of Grandpa's barn. And it has a crucial role to play in this family saga, which covers almost a century, from young Albert lying about his age to follow his beloved horse to France, to his great-grandson taking over the running of the family farm.

Two actors share the story-telling. John Walters, with his kindly, lived-in countryman's face, is excellent as Grandpa, a contented sort of chap, but with melancholy moods. His grandson is played by Gareth Bennett-Ryan, who engagingly suggests boyish delight in the old stories, and fully convinces as the engineering student who takes a gap year in Australia before returning to his Devon roots.

They play all the other roles, too, notably "Father", – who is Albert - Maisie, his wife, and Harry Medlicott, a rival farmer, a "puffed up sort of chap a bit full of himself", the original owner of the tractor.

Grandson teaches Grandpa his letters, as well as helping on the farm, so that the old man can read Tintin, Death on the Nile, Travels With a Donkey, Animal Farm. He writes too, laboriously, and his first composition tells the story of how his father came to win the tractor. As in War Horse, a ploughing challenge is involved, and the suspense and the reversals of fortune it entails make this the most exciting part of the sixty-five minute piece.

It's this story, in the old man's dialect voice, that travels with the boy to Australia, and re-reading it rekindles his love for the farm, a love that started as he sat as a child on the Fordson in the barn, and dreamed of ploughing, tilling and mowing.

This is a very different theatrical experience from War Horse. The relationship between boy and Grandpa, the emotional heart of the piece, is subtly drawn in this faithful adaptation, and Morpurgo's unrivalled skill as a storyteller, together with Matt Marks' original piano score, helped the actors hold the packed Mercury audience enthralled.