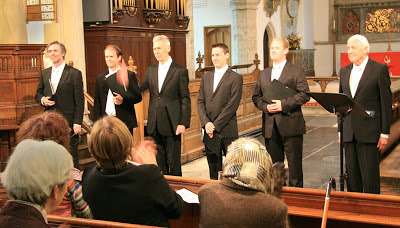 How then can mortal tongue hope to express
The image of such endless perfectness?

This brand new sequence from Opus Anglicanum looked at those heavenly messengers, warriors, healers and guardians - the angels: Michael, Gabriel, Raphael and a myriad others. 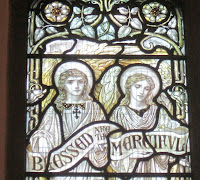 The ethereal blend of five male voices, with readings from the King James Bible, Spencer, Eliot, Wesley and more, made a deeply spiritual experience.
The music included the Russian tradition, with its solemn, resonant cadences, as well as Gibbons, Victoria and Byrd. Much of it was based on plainchant, the standard unaccompanied melody of the liturgy, which seemed very much at home within these thirteenth century walls, the sounds these stones absorbed when they were newly laid.
The tale of Dunstan, Anglo-Saxon saint and confessor, visited by angel choirs in the Mendips, was followed by the Respond from his own Night Office.
But there was new music too, commissioned by Opus Anglicanum: Patrick Larley's Antiphon, setting words by George Herbert, and, the talk of the interval, Howard Skempton's amazing And There Was War In Heaven, of 2005, a meditative texture of drone and bells disturbed by conflict.
The final reading, a Celtic prayer - Lead thou me to the land of angels ... to the peace of heaven – was followed by a simple chant, May Angels Lead Thee To Paradise, to end a memorable programme, superbly devised and performed.


O world invisible, we view thee,
O world intangible, we touch thee,
O world unknowable, we know thee,
Inapprehensible, we clutch thee!
Does the fish soar to find the ocean,
The eagle plunge to find the air--
That we ask of the stars in motion
If they have rumor of thee there?
Not where the wheeling systems darken,
And our benumbed conceiving soars!--
The drift of pinions, would we hearken,
Beats at our own clay-shuttered doors.
The angels keep their ancient places--
Turn but a stone and start a wing!
'Tis ye, 'tis your estrangèd faces,
That miss the many-splendored thing.
But (when so sad thou canst not sadder)
Cry - and upon thy so sore loss
Shall shine the traffic of Jacob's ladder
Pitched betwixt Heaven and Charing Cross.
Yea, in the night, my Soul, my daughter,
Cry--clinging to Heaven by the hems;
And lo, Christ walking on the water,
Not of Genesareth, but Thames!

In No Strange Land, Francis Thompson