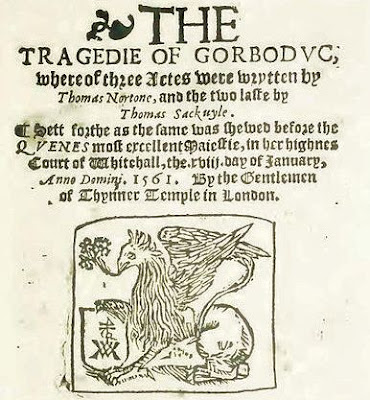 "Gorboduc, king of Britain, divided his Realm in his lifetime to his Sons, Ferrex and Porrex. The Sons fell to division and dissention. The younger killed the elder. The Mother that more dearly loved the elder, for revenge killed the younger. The people moved with the Cruelty of the fact, rose in Rebellion and slew both father and mother. The Nobility assembled and most terribly destroyed the Rebels. And afterwards for want of Issue of the Prince whereby the Succession of the Crown became uncertain. They fell to Civil war in which both they and many of their Issues were slain, and the Land for a long time almost desolate and miserably wasted."

A unique event.
Norton and Sackville, both members Inner Temple, wrote their play for law students to perform, in their Great Hall, at Christmas 1561, in the presence of the Virgin Queen.
It was the first play in blank verse; it predates Shakespeare and his famous Globe.
Now, when almost nothing remains of London's playhouses, and the Inner Temple Hall, and its Victorian successor, are no more, the lawyers of today have revived the play, under the direction of Oliver Senton [Shakespeare's Globe].
The play itself is wordy, with most of the violent conflict safely offstage. Not unlike the courtroom rhetoric for which it was perhaps considered a ludic apprenticeship. The spirit of misrule which probably enlivened the original was best captured in the dumbshows, with actors and musicians, sometimes masked, charging around, snapping twigs and illustrating the action.
Some excellent performances, though, from Rebecca Todd, on loan from the Globe, as Philander, Nigel Pascoe, QC and playwright, as old Gorboduc, Iain Christie, barrister and professional actor, as Eubulus and Chorus, and Luka Krsljanin, Cambridge actor, as the younger son, Porrex.
on Monday, April 29, 2013 No comments: 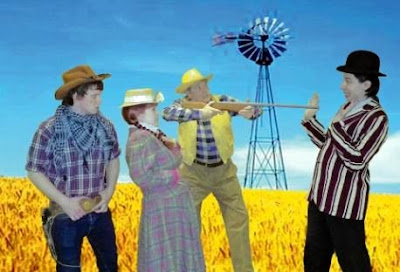 A delicious slice of sweet potato pie from WAOS, in their fourth visit to Indian Territory.
From the first rumbustious bars of the overture [MD is "Pluck that banjo to pieces, Geoff!" Osborne] it's clear we're in for an enjoyable ride, with polished, stylish performances from a large cast, and an enthusiastic chorus of ranchers, farmers and their gals.
Gareth Gwyn-Jones is a likeable Curly, powerfully sung and a strong presence on stage; his Laurey, sassy in her bare feet and dungarees, is Corinna Wilson, her beautiful voice and easy charm deployed to wonderful effect on her menfolk: the tortured Jud Fry [compellingly characterized by Stewart Adkins, in his porn-bedecked smokehouse] as well as her cowboy of choice. Their People Will Say duet one of many musical highlights.
The other couple, Abigail Lowman's larger-than-life Ado Annie and Michael Watlings' agile Will, are a delight too, in their duet, as well as the Kansas City and Cain't Say No solos. More young blood for the Persian pedlar; if James Simpson's accent is less than convincing, he scores highly on comic timing and dress sense.
The older generation is capably represented by Anne Wilson's excellent Aunt Eller, feisty, wise, and very funny, as well as Ron Howe, appearing in his fourth Oklahoma, this time as Judge Carnes.
Robyn Gowers directs with an experienced eye for detail and the bigger stage picture – the wedding group, happy couple aloft in the spot just one example. Nice to see the Dream Ballet, too.
One or two characters do have a tendency towards "standing like statues" and a dark stage lit by spill from the house is never a good look, but the packed audience on the last night enjoyed a splendid show, a shining example of the best of amateur musical theatre.
on Sunday, April 28, 2013 No comments: 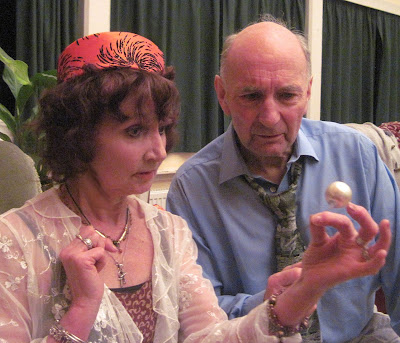 Murder Mystery Evenings are everywhere these days: on trains, in hotels, at stately homes …
Not surprisingly, Little Baddow's first foray into this popular genre is a cut above the usual cardboard Christie/Cluedo offering. Brian J Burton's play, while not Priestley, or even Francis Durbridge, does have some clever twists in its fifty minutes, and it is performed, without a hint of tongue-in-cheek irony, by an accomplished cast, directed by Lindsay Lloyd.
Caroline Ogden is superb as the cool, calculating wife, who, she confesses up-front, has done away with her husband, on the sofa, with a hat-pin. Supper guests John Peregrine and Vicky Tropman, not without murder motives themselves, become cleverly manipulated accessories after the fact. Ken Rolf is the Cornish bookseller; his sole contribution before the interval an "old-fashioned look" directed at his scheming spouse …
Discussion ensues over the canapés, the audience tables encouraged to provide their own resolution to the plot – Friday night's suggestions included Max Clifford, Fifty Shades and sapphism, though not all at once.
The swift dénouement – everything wrapped up in five minutes – is skilfully handled; while every member of the capacity audience had differing views on the motives and morals of the characters, we all agreed that this format [murder mystery in the round with food and drink] was a welcome addition to Little Baddow's repertoire.
on Sunday, April 28, 2013 No comments: 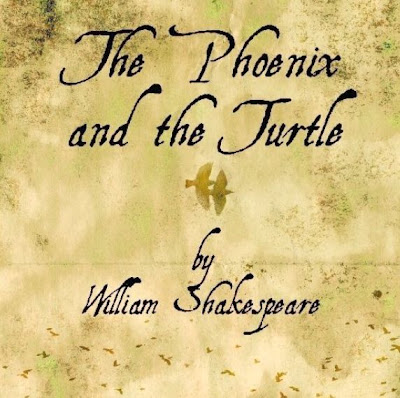 Shakespeare's birthday [it's the big 4-5-0 next year, Will!] has been celebrated by the Globe, with its sell-out Sonnet Walks last Saturday, and now it's the turn of the older house, just inland, to perform verses to mark the day, in an entertainment directed by David Pearce.

Before the sonnets, two longer pieces.
The Lover's Complaint, often attributed to Shakespeare, in a performance version with Trevor Murphy as an agricultural artisan, with hoe, joined from across the water [nicely rippled by discarded "folded schedules"] by Francesca de Sica, who shares the narration. It's a lengthy tale of pursuit, seduction and desertion, but de Sica's natural delivery gives us a clear window into the verse's heart.
Then, a much more direct recitation of the metaphysical Phoenix and the Turtle, by Chris Paddon. As Shakespeare has it, "beauty, truth and rarity".
After a short break, the twelve sonneteers [outnumbering the punters now] bringing us an eclectic selection – by no means all sonnets – in performances ranging from the barely adequate to the richly dramatic. Many revelations in the Bankside bran tub, as well as some old favourites, though we never got the promised chance to choose for ourselves.
Among the latter, Ben Jonson's eulogy of the Swan of Avon, Donne's Sun Rising, Golden Slumbers [by Thomas Dekker, apparently] Shall I Compare Thee, and Marlowe's Come Live With Me.
And, among the former, Kit's erotic Ovid – "Jove, send me more such afternoons as this!" - a rare moment of real humour [Jonson's Giles and Joan, precursors of Coward's Bronxville couple], and a reminder of the sonnet's Italian origins with a lovely dual language 116.
The readings were introduced with, at least, title and author, whereas an "innocent ear" approach might have proved more intriguing, nowhere more than in the most moving of the pieces, Jonson's "On My First Son", which could easily have been WS on the untimely death of Hamnet …

Farewell, thou child of my right hand, and joy ;
My sin was too much hope of thee, lov'd boy.
Seven years thou wert lent to me, and I thee pay,
Exacted by thy fate, on the just day.
Oh, could I lose all father now ! For why
Will man lament the state he should envy?
To have so soon 'scaped world's and flesh's rage,
And if no other misery, yet age !
Rest in soft peace, and, asked, say, Here doth lie
Ben Jonson his best piece of poetry.
For whose sake henceforth all his vows be such
As what he loves may never like too much.

RUN FOR YOUR WIFE 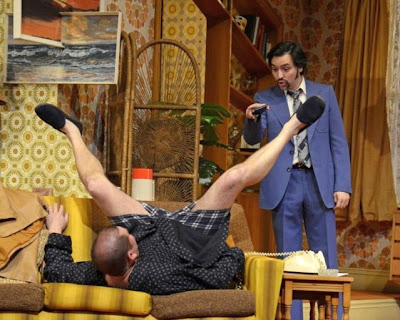 RUN FOR YOUR WIFE
Cut to the Chase at the Queen's Theatre, Hornchurch
22.04.13
for The Public Reviews
production photograph: Nobby Clark

Hazardous business, farce. Overdoing the physical stuff in technical rehearsal, Sean Needham does his leg in and is prescribed total rest. Which, for an actor, translates as playing the part, but with the aid of a walking stick.

Though we may have lost some of the more frantic moves, the pace certainly doesn't suffer in Ray Cooney's classic from the late 70s. [Not to be confused with the ill-advised film flop of 2012.]

Different times, back then. Well before political correctness kicked in, when "fairy", "pansy" and "nancy" could be spoken without irony and Mary Whitehouse was still a force to be reckoned with. But, as the youngsters in the front stalls should be aware, this is just as valid a period piece as any Restoration comedy. And that's how it's treated in this tremendously enjoyable revival at the Queen's. Mark Walters' costumes are firmly in the flares and kipper-tie period, with Dan de Cruz's DS Troughton a reasonable ringer for George Best in his prime. The set, also by Walters, is a triumph in brown and orange, cleverly using perspective and high ceilings to suggest the two flats in one, with a double picture frame in the centre the final flourish.

For this tale of bigamy is told with a structural device that Ayckbourn would be proud of – John Smith's two lives are superimposed, doubling the potential for comings and goings, chaos and confusion.

As the two-timing taxi driver, Needham neatly conveys the desperation of the serial liar, hobbling convincingly around his two love nests. As his well-meaning, feckless neighbour, Cut to the Chase stalwart Simon Jessop is a joy to watch, as circumstances compel him to animal husbandry and the love that dares not speak its name. There's a very dated camp stereotype living upstairs, straight out of the bona world of Julian and Sandy [amusingly done for what it's worth by Elliot Harper] and the two wives, barely distinguishable, are played with style, glamour and mounting hysteria by Barbara Hockaday and Sarah Mahony. "Pussy" Porterhouse, the other policeman, is an increasingly bewildered James Earl Adair, brewing tea in his fancy pinny as the chickens come home to roost.

It's a hectic whirl of alleged nuns, so-called transvestites, little white lies and panicky telephone calls. All in the best possible taste, though; "bloody hell" and "silly cow" the strongest the language gets. Those were the days.

Bob Eaton's production is fast-paced, perfectly timed, and a salutary reminder of those glorious farces which survive today mostly in the pastiche garb of Habeas Corpus and Noises Off.