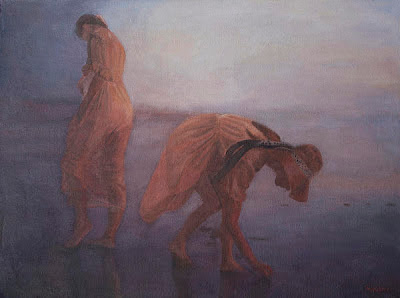 THE SHELL SEEKERS
Theatre at Baddow in the Parish Hall
10.05.13

Rosamunde Pilcher's best-selling family saga, adapted for the stage by Brady and Bingham, is a big ask for an amateur group.
It has a large cast, it skips between decades and locations, and its emotional heart can seem elusive.
David Saddington's set was a model of economy, fitting the café, the Cornish studio, the beach, the Cotswolds cottage and its garden into a very restricted space. It all worked very well in Pauline Saddington's capable production, except that the patio doors felt awkward and tended to cast distracting shadows. [Perhaps cut off in a wavy line at one-third height, which might even allow for perspex in the frame]. And the ends of scenes, often with a line heavy with feeling, lost some significance in the frequent fades to black.
Not all the actors were comfortable in the easy middle-class milieu, but splendid work from Nicola Marsland as Nancy, who can't leave well alone, with Russell Everard as the hen-pecked worm who turns, and Roger Saddington as her brother Noel. The young people, who are also ghosts from the past, were Claire Lloyd as Antonia and John Mabey as the gardener Danus. Lawrence Stern [not the Shandy man, just as Cosmo is not the magazine of Joanne Gent's Olivia], the painter whose Shell Seekers hangs in pride of place, was compellingly played by Peter Nerreter. The inimitable Rita Vango brought touching pathos to Penelope, whose story this is, especially when she was recalling the smell of her father's studio or quoting McNiece.

September has come, it is hers
Whose vitality leaps in the autumn,
Whose nature prefers
Trees without leaves and a fire in the fireplace.
So I give her this month and the next
Though the whole of my year should be hers who has rendered already
So many of its days intolerable or perplexed
But so many more so happy.
Who has left a scent on my life, and left my walls
Dancing over and over with her shadow
Whose hair is twined in all my waterfalls
And all of London littered with remembered kisses.

Email ThisBlogThis!Share to TwitterShare to FacebookShare to Pinterest
Labels: THE SHELL SEEKERS, theatre at baddow