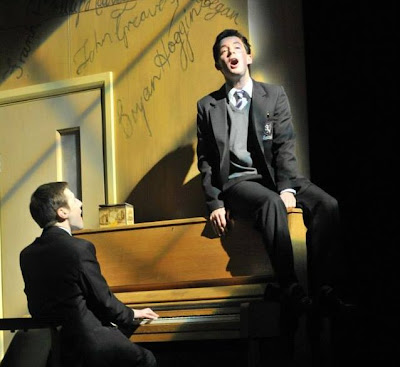 The sixth show of the Made In Colchester season, and it's a superbly realised production of Alan Bennett's unlikely hit of 2004.
That improbable Sheffield Grammar now has an improbable Latin song, though the backdrop photograph suggests an institution founded, like the real King Ted's, in 1905.
Ignatius Anthony is entirely believable as the geographer from Hull, the Head obsessed with league tables and scholarships, who twice savagely dismisses art, literature, history and other such silliness. Mind you, he clearly has staffing problems.
Mrs Lintott [Liza Sadovy] is a traditionalist, thorough but dull, prone to cynical outbursts. The callow supply teacher he drafts in to help coach the Oxbridge hopefuls of the title is keen but woefully inexperienced. And law-unto-himself Hector is a liability, his lessons "not curriculum-directed at all …".
As young Irwin, Freddie Machin catches the social ineptitude behind the academic carapace. He is less convincing, perhaps, later in life, as the spin doctor or the TV historian, based, it is surmised, on Niall Ferguson.
Stephen Ley's Hector is a shambling figure, given to florid histrionics, but clearly a much-loved inspiration to the boys, despite his lack of focus and his predatory fumblings. The subtext, as elsewhere, is elegantly suggested: his Drummer Hodge dialogue with Posner, a hand proffered and almost taken, suggests a deeper "diffidence or shyness" [The Mikado, as Hector might have pointed out in different circumstances]. His numbness when arraigned by Armstrong is deeply moving.
Daniel Buckroyd's staging has no pounding Eighties score, no fancy filmed inserts. Instead we have Scripps vamping till ready, and just the two slides: the school and Rievaulx. Buckroyd himself plays the Director in the film, though as a voice off. There is a simple revolve, smoothly revealing the classroom, its walls distressed with names from desktops, and, as necessary, the Head's study, the staffroom, a corridor with pigeon-holes.
The music is excellently done. Supervised by Richard Reeday, the segues reference the songs and the artistes from the script. Scripps [Max Gallagher], a pale, earnest Anglican, plays the piano, notably for Posner, the odd boy out, denizen of dictionary corner, Hector's greatest fan, the only loser in the game of life, brilliantly played by Philip Labey. His "love and understand me" is laden with longing, his Sing As We Go was greeted on the first night with awed silence.
All the boys inhabit their roles with sincerity and enthusiasm – Oliver Llewellyn-Jenkins' rugger-mad Rudge, Scott Arthur's cocky Dakin, James Dryden – in his professional début – as the life-and-soul Timms.
And the classroom scenes feel natural and improvised. The "tosh", the old movies, the French class, the shared passions. Bennett's school is a strange mixture of the modern and the Secondary Modern – the Headmaster would surely be harder on uniform infringements than Hector – and the wide cultural sweep is symbolised by Timms' Nike bag and Posner's satchel. The original play is very long, but I still miss many of those lost lines [Mrs Lintott particularly pruned], the Seventh Veil and the knock at the door …
But this is an affectionate production, faithful to the spirit of the piece, and unusually respectful of the playwright's words and intentions – the sexual connotations of Poland, the handwriting compared, the subjunctive mood, history rattling over the points ... 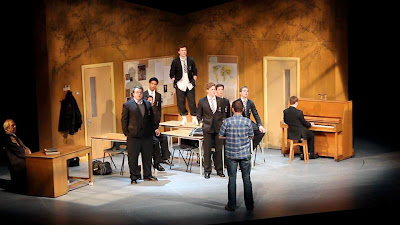