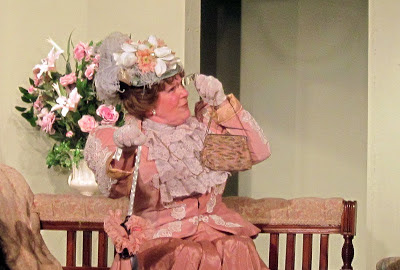 THE IMPORTANCE OF BEING EARNEST
Greville Theatre Club at the Barn Theatre Little Easton
30.05.13


Oscar Wilde's "trivial comedy" is very well received by the "serious people" of rural Essex – gales of laughter, and knowing anticipation of more than one classic riposte.
Production values are high. The costumes look substantial and stylish, from Aunt Augusta's brocade to Gwendolen's cerise gown to Algy's garb of woe to the Canon's gaiters. The set is simple – pale Aesthetic green – with added trellis for the Woolton garden, and an impressive quick change to the Morning Room.
Nine actors from the Greville rep bring Oscar's words to life. Urbane, poker-faced Lane [Rodney Foster] and his country cousin Merriman [Steve Bradley]. Miss Prism, delicious in her mortification, is Judy Lee; Chasuble, her metaphorical admirer is richly, ripely drawn by Peter Nicholson.
The quartet of lovers: Jonathan Scripps' smug, smiling Jack, sartorially stunning in his Act One suit, could clearly give some tailoring tips to his wicked friend Moncrieff [Adam Thompson], Wilde-eyed with a hint of the Mad Hatter. And a deft deliverer of his many epigrams.
Sonia Lindsey-Scripps – like a pink rose – as fun-loving Cecily, and Carol Parradine as Gwendolen, her supercilious look, her insincere smile reminiscent of Dame Maggie in her prime; she will clearly become like her mother, superbly depicted by Jan Ford, the glances, the inflections, the timing, the eloquent body language making a satisfyingly rounded character. Her "handbag" more rueful than outraged.
Occasionally lines were lost to laughter, but the pace is lively, the staging inventive. The synchronised shock reaction on "Your brother!", and the girls drawing together for the "wounded, wronged" reconciliation just two examples of effective ensemble.


The Importance was directed and produced for The Greville by Marcia Baldry and Diana Bradley.
on Friday, May 31, 2013