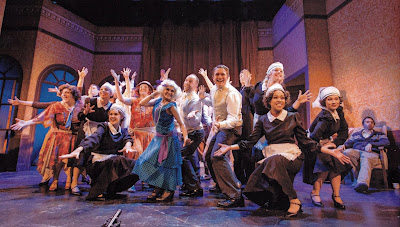 THE DROWSY CHAPERONE
Leigh Operatic and Dramatic Society
at the Palace Theatre, Westcliff
11.05.13
for Sardines Magazine


We begin with a prayer offered in the darkness. "Oh dear God, let it be a good show; and let it be short …"
The hundred-year-old darkness of the Palace was a superb starting point for LODS' Drowsy Chaperone, which was both very good, and quite short. It's a musical within a comedy, a hymn of praise to Broadway's Golden Years, hosted by the nerdy, knowledgeable Man in the Chair. He doesn't get out much, is clearly widely read [Salman Rushdie and The Greek Myths on his bookshelf] but his pride and joy is his collection of original cast LPs. And tonight he has picked out a treat – Gable and Stein's The Drowsy Chaperone of 1928.
As he lowers his stylus, the crackly static is replaced by the excellent pit band [Stuart Woolmer conducting], and his little apartment fills with that original cast of stock characters, pouring in from the wings and his Tardis kitchen cupboards.
Not a weak performance, or a dull moment, in an impressive staging of this cult show, which started life at a stag night in Canada in 1997. David Shipman is Robert Martin, with his wooden acting, his roller-skates and his All-Brite smile, whose wedding to Oops Girl Janet van de Graaff [Kathy Clarke], with her priceless Show-Off encore, is at the heart of the cheesy plot. Both excellently done, as is Samantha Gourley's Chaperone of the title, belting out her rousing anthem and rootling for bootleg in her ample corsage. Youngsters Matthew Ford and Lily-May Byfield are outstanding as the Best Man [a stunning tap routine with Shipman] and the Aviatrix ["what we now call a lesbian..."], a brilliantly bold and brassy performance. And I mustn't forget LODS' chairman, Andrew Seal, "chewing the scenery" as Latin Lothario Adolpho.
And then there's The Man In The Chair. Anonymous, agoraphobic, living every moment of his favourite musical, torn between sharing trivia, footnotes and tittle-tattle and retaining the integrity of the work, his intermission limited to a power bar and a quick pee. A memorable character from Peter Brown; a genial companion in his cardigan and carpet slippers, he can't resist joining in the production numbers, crashing his sauce-pan-lid cymbals after a reviving drink …
The dance routines, choreographed by Sarah Robb, are polished and touchingly true to the spirit of the show, and Helen Sharpe's direction, with Rachael Plunkett as her MD, ensures a slick, professional feel to this unique entertainment. I shall long remember the big I Do In The Sky number at the end, with Trix's biplane assembled before our eyes from the white goods in the kitchen.
The production values are spectacularly high: cloche hats and loads of authentic-looking frocks, detailed props – even The Enchanted Nightingale has its own LP sleeve – and the glossy programme boasts not only a plethora of professional production shots but even a pull-out facsimile of the programme from the Morosco première.

Let's leave the last word to the Man in the Chair: "So, that was the Drowsy Chaperone. Oh, I love it so much! I know it is not a perfect show, the spit-take scene is lame and the monkey motif is laboured... but it does what a musical is supposed to do! It takes you to another world and it gives you a little tune to carry in your head for when you're feeling blue, you know? As we stumble along on life's funny journey. As we stumble along into the blue..." 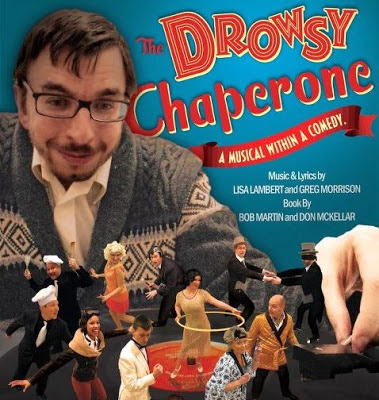