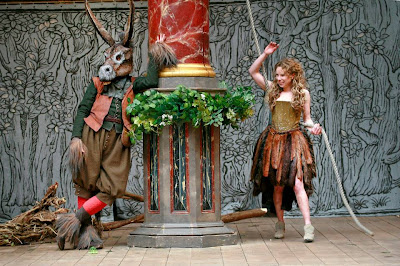 A first look at Dominic Dromgoole's Dream.
Plenty of rough magic, and a heavy hint of Hern the Hunter in Jonathan Fensom's design.
Some magical performances, too, including the excellent Michelle Terry – in Love's Labours here in 2011 – as Titania, beautifully spoken, and equally affecting mourning the loss of her votress and wooing her "monster". Less convincing vocally was her Oberon – John Light – though he does look the part as a Satyr. Sarah MacRae is a bright, bold Helena, though generally the lovers take too long about their antics.
Two actors seem particularly to embody the authentic Shakespearean essence of their roles: Matthew Tennyson as a fey, teenage Puck, and Pearce Quigley as a dry, droll Bottom, clowning, ad-libbing, continuously hilarious despite the visual and vocal handicap of the ass's head.


The groundlings were helpless with laughter at the Mechanicals' thespian efforts – on a poky, rickety pageant cart, complete with wonky pillars echoing those on the stage, they are everyone's amdram nightmare. Good to see Snug's carpentry skills put to use, as he noisily repairs the stage mid-tragedy – Edward Peel playing Eric Morecambe to Quigley's Shirley Bassey ...
on Friday, May 31, 2013