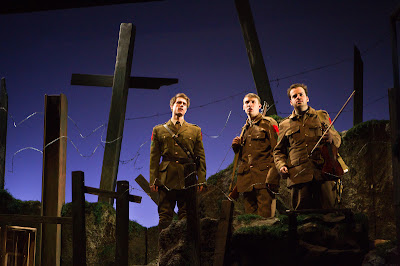 Original Theatre Company at the New Wolsey Theatre, Ipswich
25.03.13
for The Public Reviews

Sebastian Faulks' classic novel, with its psychological insights and its graphic descriptions of trench and tunnel, was never going to be easy to adapt.
Perhaps that's why this first ever touring production is Rachel Wagstaffe's second attempt; she's abandoned the time frame of the printed page [retained in the West End version] for a much more free-flowing memory play.
It begins in 1916. There's a kind of curtain-raising ceilidh behind the lines, with hints of Oh What A Lovely War and some Journey's End jitters amongst the men.
Stephen Wraysford, a callow officer, reads rats' entrails and struggles to motivate his men. Flash-backs, seamlessly stage-managed, take him to Amiens in 1910 and his affair with a married woman which haunts him still in the heat of battle.
Wraysford is superbly drawn by Jonathan Smith, in his first major role since LAMDA. A humane officer, heartbroken by Isabelle's desertion. Drinking heavily, searching war-torn Amiens for traces of her, weeping at the kindness of her sister Jeanne [Poppy Roe], determined to escape the tunnel tomb. A deep, honest performance.
Sarah Jayne Dunn is his Isabelle – cool and aloof, passions kept in check, she is especially effective in the powerfully understated reunion scene.
As in the novel, the strongest, most sympathetic character is salt-of-the-earth Jack Firebrace, given memorable life here by Tim Treloar. We meet him first in a makeshift drag act, we grieve with him for the loss of his little son, feel his frustration as he tries to capture a likeness of Arthur Shaw [Liam McCormick], witness his final sacrifice as he wills Wraysford to escape into the daylight of peacetime.
Excellent support from a hardworking ensemble. Much doubling, notably the Captain Gray and René Azaire of Malcolm James, and Charlie G Hawkins as the Azaire boy and the 15-year-old recruit Tipper.
The music [Tim van Eyken] and the movement were both brilliantly done – hymn tunes, an accordion, a fiddle, all underpinning the action and the emotions – and the palpable claustrophobia of the mines, evoked so simply with a couple of lamps, a wooden brace and the sheer force of the performances.
A constantly moving production from Alastair Whatley, full of characters we can care about, ceaselessly reminding us of the savage futility of warfare. It's hard to imagine the book being better done as drama. Two minor niggles: the French accents, though subtly done in the main, are unnecessary. And the strange balletic seduction, violins throbbing on the soundtrack, seems to belong in a different show altogether.