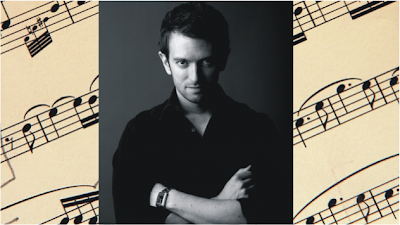 ALISDAIR HOGARTH
Composers in Focus at the Cramphorn Theatre
27.01.13

Three pianists, three consecutive evenings. Composers in Focus ended on Sunday, with an impressive recital by Alisdair Hogarth. [The other recitalists were Miyuki Kato and Christopher Weston.]

In Essex we were privileged to hear Alisdair right at the start of his performing career – since then he has gone on to achieve an international reputation, is much in demand as an accompanist, and has formed his own group of young professional singers, The Prince Consort.

In the Cramphorn, he began with a clearly articulated Haydn sonata, played with a compelling narrative drive, especially in the central Adagio. Two delicately melancholy Chopin Waltzes were followed by the dramatic meanderings of the great Polonaise Fantasy.

After a familiar Schubert Impromptu, Hogarth scaled the heights of Liszt's towering B minor Sonata. He gave an intelligent reading of a demanding work, embracing its staggering emotional and intellectual scope, the passionate pyrotechnics and the intense, introspective lyricism.

A wonderful programme, played with a secure technique and not a little stylish sparkle. I was sorry not to have been able to hear the whole series, and especially sorry that this recital was not better attended.
on Thursday, January 31, 2013 No comments:

THE INSANITY OF MARY GIRARD 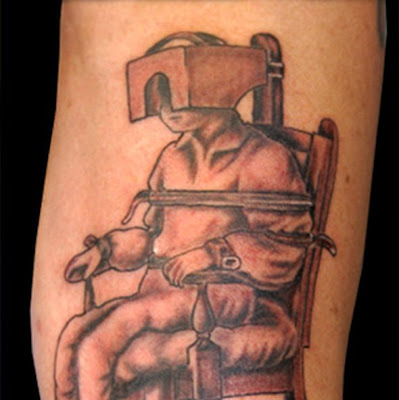 THE INSANITY OF MARY GIRARD
Chelmsford Theatre Workshop at the Old Court
29.01.13

Lanie Robertson's 70s piece is a fictionalized treatment of a true story; the message, as so often, is that people in the past [18th century Philadelphia] had much to learn from their more civilised descendants. Not much of a basis for history, but it does make for a powerfully dramatic polemic. An unstable woman is incarcerated in an asylum, purely on the word of her husband, who, she says, is threatened by her love of life and the freedom of her mind. 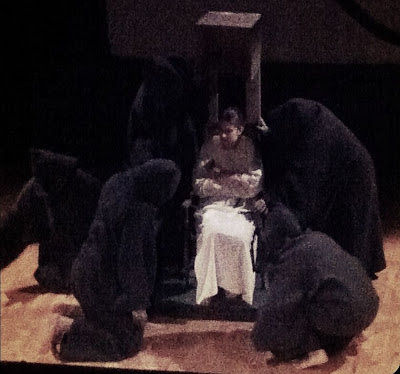 Kelly McGibney's bold staging opens with the unfortunate Mary in our midst, strapped to her "tranquillizing chair". Harsh lighting spills onto the "polish of the fine wood floors". Soon she is surrounded by five Furies – other inmates or figments of her fevered imagination ? - crouched and crawling around her, cowled to hide their faces, taunting and teasing her with cruel guessing games. Excellent physical work from this ensemble, who also play key characters from Mary's back-story, as she summons them to her cell. We share her disorientation and her sensory deprivation, since the voices come from the statue-still Furies, but the action is mere shadows, excellently brought to life on a distant screen. Plato's cave, perhaps. I loved the way the Furies dissolve back down to the floor at the end of each visitation.

A challenging piece, not without its longueurs, but when taut writing and physicality come together, as in the Prayer/Key sequence, it is exciting, dangerous theatre.
Well served by a fine, mostly young, company, working hard to keep the impetus alive, with poor Mary played intelligently, touchingly, without histrionics, by Hayley Kemp, making her CTW début in this rare revival. The piece ends, provocatively, with her returning to the chair, embracing her fate, eagerly awaiting the Sabbath spectators as the church bells peal out in the darkness.
The Assistant Director was Danny Segeth, with Catherine Hitchins as Movement Consultant.

upper-arm tattoo of the Tranquillizing Chair by Jeff Johnson 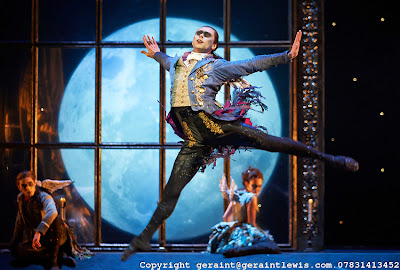 Matthew Bourne's long-awaited completion of his Tchaikowsky trilogy comes to Sadler's Wells for a sell-out season, part of a tour which started down in Plymouth, and moves on via Milton Keynes to Moscow.

The specially recorded score sounds lush, but less obviously amplified than his Cinderella, and is trimmed to fit more neatly into Bourne's radical reworking of the story.

We begin in 1890 [Aurora's christening], the year the ballet premièred, and fast forward through 1911 [her coming of age] to 2011 [her awakening] and Last Night [her wedding].

Lez Brotherstone's design is gloriously Gothic for the opening, then opens out to an Edwardian Country House lawn – tea and tennis – and a slim forest lit by oil lamps, with a less impressive foray into a decadent nightclub.

The dancing is often inventive, occasionally heart-stoppingly beautiful in its execution.  The entry of the Fairies, complete with candles, uses travelators to give an ethereal effect; the famous Waltz, watched over by a towering statue of a weeping angel, fills the lawn with movement, and the Rose Adagio becomes a romantic pas de deux, with a tragic, toxic black rose lying in wait for the headstrong princess and her gamekeeper lover.

Story-telling and character are Bourne's stock-in-trade, and here we have a barefoot, capricious Aurora, first encountered as a wonderful puppet, recognisable to anyone who's met an energetic, wayward toddler. A Lilac fairy who is a virtuous vampire ensures that the princess's Leo lives long enough to waken her with the traditional kiss. The battle between good and evil extends right through the story, with Carabosse succeeded by her vengeful son, Caradoc. Good triumphs, of course, and the happy-ever-after ending reserves one last surprise blessing before the curtain calls ... 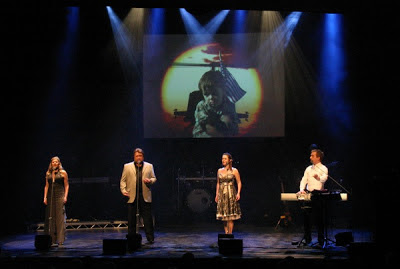 BEYOND THE BARRICADE
at the Civic Theatre
19.01.13

Hear the big numbers from your favourite musicals, bludgeoned into submission by confident vocalists with a wealth of experience from Shaftesbury Avenue to the cruise ships.
Back again in the Civic's post-panto slot, the four Les Mis survivors who make up Beyond the Barricade, took us seamlessly through a raft of modern musicals, from Phantom to Jersey Boys, with a cursory backward glance to the "dim and distant past" - Carousel.
Though there's no chorus, and a backing group of just three supporting the excellent Andy Reiss, keyboard and lead vocalist, there's no shortage of kilowatts here. The anthem from Chess, Tell Me It's Not True from Blood Brothers, Why God Why from Miss Saigon, all given strong, muscular performances. There is a danger that everything will end up sounding similar, Superstar and Sunset Boulevard all done in the same style. And some musicals, Lion King for one, don't really survive having the staging stripped away, though we did have busy back-projection to remind us where we were, in a more or less kitsch kaleidoscopic montage.
The few quieter, wittier moments were welcome: It's All For The Best, from Godspell, was a delight – Reiss duetting with David Fawcett, a hardworking Valjean back in the day. And it was in the Les Misérables finale, not surprisingly, that all four found themselves most comfortable – a superb Stars from Reiss, I Dreamed A Dream from Rebecca Vere, On My Own from Beth Humphries, and a gutsy One Day More encore from this popular tribute band, now in its fourteenth year of touring.

Email ThisBlogThis!Share to TwitterShare to FacebookShare to Pinterest
Labels: BEYOND THE BARRICADE, Civic Theatre

Alice the Panto was a refreshing change from the traditional canon, and though the script rarely sparkled, the entertainment value was high, thanks to some great performances and many delightfully unforeseen twists.
The invisible swords, the Karma Violets, the satnav. And the walkabout [with sweeties for all] was done this year by three wild haggis, to the strains of There's A Moose Loose …
A strong, experienced chorus provided many of these delights, not least the playing card army, proudly led by Richard Butler's camp commandant. Richard also brought the house down with his stoned Caterpillar.
Hannah Walker was a confident Alice, with Ken Little as Dame Milly, her mum, in a splendid playing card hat. Martin Final brought gravitas to the baddie, and Heather France worked brilliantly with Debra Hensman as the Tweedly Twins. From a huge cast, space only to mention Mike Lee's Mad Hatter, Viv Abrey's formidable Queen, trembling with fury, and Alex Lee's outstanding turn as Wally the jester, with cap and bells and an unending stream of groanworthy jokes – "plenty of hoke" indeed.
Good design work, too, with the goldmine backdrop especially impressive, lovely costumes in rich hues, and a marvellous mix of music [Darrel Drake at the keyboard] from the old Disney version to the almost operatic theme from the Tim Burton movie.
This unusual panto was adapted and directed by Jenny Broadway, with Chrissy Gould as Musical Director.