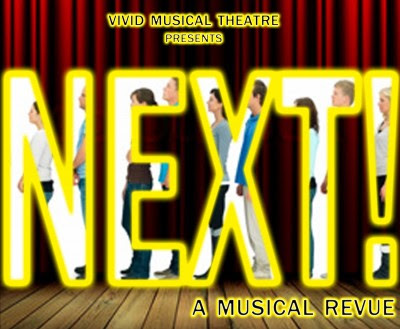 NEXT !
Vivid Musical Theatre at the Brentwood Theatre
12.05.13

In they troop, clutching their dots and their resumés, holding hands, the young, and not-so-young, hopefuls on their way to audition.
This compilation concept album from Vivid showcased a range of talented performers, in numbers that were often witty, sometimes wise, and always well sung.
This is Chorus Line country, of course, and that show was well represented, notably by Sian Hopwood [Sing] and Juliet Thomas [What I Did For Love]. And again in the specially arranged, ingenious encore medley that blended Les Mis and Night Music, South Pacific and Sweet Charity.
Sondheim's Follies is another rich seam, and we heard a great Still Here from Mandi Threadgold-Smith, and a bubbly Broadway Baby from Katie-Elizabeth Allgood [the Runner in the audition scenario] with the whole company.
The Panel had their moments, too, with [director] Emma Jane Sweeney comforting one hapless hopeful with Carrie Underwood, and [MD] Ian Southgate duetting with Juliet in a number from Once, now garnering starry notices at the Phoenix.
Intriguing to hear some less familiar fare: Die Vampire Die, from the weirdly named "{title of show}", the amusingly done Alto's Lament, Stephen Gurshon's energetic rendering of Joe Papp, from William Finn's Elegies, and the number that opened the show, Cathy's lament to her father from The Last Five Years. Now there's a show I'd pay good money to see ! What do you say, Ian and Emma Jane ?
Next! was an original concept by Emma Jane Sweeney and Ian Southgate, presented to raise funds for Brentwood Theatre.
on Monday, May 13, 2013