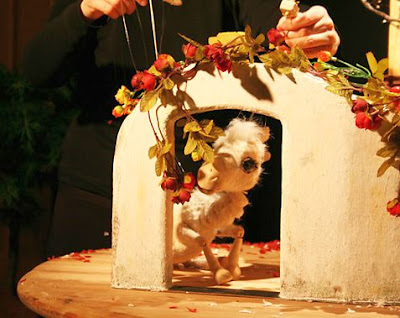 PLATERO Y YO
Mike Maran at the Cramphorn Theatre
02.05.13

A magical hour's entertainment from Mike Maran, this time as philosopher poet Juan Ramon Jimenez. A very international effort, too, with the Spanish poems spoken by a Scots actor, the Italian guitar music played by Aussie Craig Ogden, the production and the puppetry by the Georgian company who collaborated on Captain Corelli.
The Platero of the title is the poet's silvery donkey and confidant. There is no real narrative here, but a succession of poetical images from Andalucia. The soul of the little town is variously seen as bread, or wine, the poet is persecuted as a madman, and intimidated by fiestas and fireworks. His donkey is his constant support, until it succumbs to a poisonous root, and trots off to give rides to the angels, his soul a butterfly beneath the pine-tree's shady canopy.
A miniature Moguer – houses, convent, cemetery – is created on a small revolving table top. Here too Platero comes to life, with his long neck and dark eyes, very much the star of the show.
A simple setting, allowing the words to work their magic as the poet reflects on life and death, bread and wine, sky and streams in a timeless Andalucian landscape.

Produced by the same team which brought us Captain Corelli in 2011, this is a work on a much smaller scale, but in its way just as magical, and every bit as entertaining.

Mike Maran is first and foremost a storyteller. The text he works with here is a collection of prose poems, vignettes of life in Andalusia, with the poet and his little silver donkey Platero centre stage. Just over an hour, with a rosary of incidents and images, sometimes merging, sometimes punctuated by darkness.

Against a musical score for solo guitar, written for these verses in 1960 and specially recorded in Tblisi by Craig Ogden, Maran muses on Christopher Columbus and the Romans, the children of the poor, a swallow's nest in the convent's campanario. There are few other characters: Don Jose, the foul-mouthed priest, Darbón the bulky vet, the charcoal-burner's daughter singing a lullaby. Movingly, he visits a children's cemetery, with a touching reminiscence of each name. White snow gives way to red blossom, just like Fra Angelico's vision of heaven. A canary savours a brief taste of freedom.

Our philosopher poet is joined on stage by Platero himself. He is a little puppet, the size of a kitten, perhaps. Big dark eyes, a long neck. Brought to charming and wholly convincing life by Nino Namitcheishvili. He walks on a rotating table, which is also the blank canvas for little buildings and trees, lovingly hand-crafted, like the poems themselves. Platero is dressed up as a camel at Christmas, peeps through a tiny doorway, peers over the poet's shoulder as he reads Ronsard. But he is frightened by fireworks, and weeps at the carnival – like his master, he is "not cut out for such things". He eats a poisonous root, sickens and dies; buried under the tall pine, his soul a butterfly, his body giving rides to the angels in heaven.

Maran's instantly recognizable style, thoughtful, deliberate, spontaneous, is ideally suited to this text; we can easily believe that this is the man from Moguer, crafting his enchanting little poems anew for each audience.