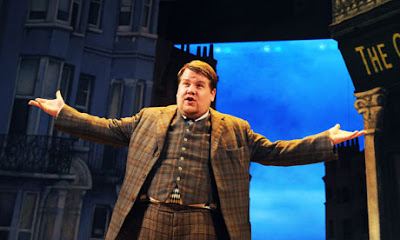 ONE MAN, TWO GUVNORS
National Theatre at the Lyttleton
28.08.11

What would Carlo Goldoni make of Richard Bean's hugely successful and side-splittingly hilarious re-working of his Servant of Two Masters ?

Well, he'd recognise the famous dinner scene, superbly served up in Nicholas Hytner's stylish production. And the flats giving a perspective view of the seaside – Brighton standing in for La Serenissima. And the concept of a star player stepping out of the plot to improvise like a stand-up, and interact with audience members. Goldoni's original Harlequin one such – the talented, and equally famous James Corden another, working to brilliant effect as the permanently hungry and slightly slow-witted Francis Henshall, who strives to serve both Jemima Rooper's lairy Roscoe and the public school toff Stanley Stubbers [beautifully caught by Oliver Chris].
The classy company included several masters of the farce, not least the crowd-pleasing doddery waiter of Tom Edden.
And I've not even mentioned the marvellous music [Grant Olding], using skiffle and rock'n'roll pastiche to bridge the scenes and transport us to the early sixties. With some glorious speciality spots, including Corden on the xylophone.
A sell-out in the Lyttleton, a West End transfer already selling well, and cinema relays sold out all over the UK – Goldoni, who died in poverty and in exile, would certainly have approved of that.

They pulled it off last year with a pared-down, no-frills Cats; this year the even more demanding, infinitely darker Chicago, the three-ring circus of Cook County Jail, where celebrity is a drug and murder is entertainment.

Gavin Wilkinson's karaoke version was hard-hitting [though they did “pipe down the swearing”] and caught the steamy atmosphere to perfection. No lighting to help, nor sound reinforcement, just these madly talented young people [average age 14 or 15], inventive choreography and stunning stagecraft. And the chairs of course, used with flair and imagination. The precision of the movements, the depth of the characterizations were an incredible achievement in less than a week.

A very strong ensemble, all of them characters in their own right, and very effective in the big numbers – the sisterhood tango, Razzle Dazzle complete with knife throwing act. Sam Toland was a touching Mr Cellophane, Ashton Reed played seasoned vaudevillian Velma, with dance captain Liz Pilgrim as Mama Morton. Some of the best character work came from wannabe celebrity Roxie [Sophie Walker], and her mouthpiece Flynn, a very stylish Josh Butcher. Their impeccable quick-fire duet, which blossoms into a full-blown riot of dance moves, was brilliantly done. I could believe that sequence alone took five days to set, but no, the whole hour was polished and perfected from scratch in that time. Sixty minutes of energetic, emotional musical theatre, and still oomph enough for the Hot Honey Rag and a fantastic finale. 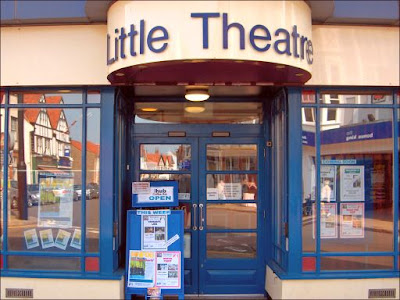 Patrick Hamilton died in Sheringham, an unhappy alcoholic. His most recent success was his novel Twenty Thousand Streets Under The Sky, in a 2005 adaptation for the BBC.
But he is best remembered for his enduringly popular psychological thriller Gas Light, and it was this piece that was revived this season at Sheringham, one of the few seaside reps to have survived into the 21st century.
Illona Linthwaite's production was impressively atmospheric, greatly helped by Matt Nunn's oppressive Victorian parlour.
William Hartley was a chillingly menacing Massingham, the killer with a heart of stone who tries to humiliate his wife into the mad-house. I admired his quiet stillness, his suppressed fury as he finds his private desk ransacked, and his caged-animal pacing as the spirit of justice finally corners him. I was less convinced by his sotto voce Gus Elen song as he returned from a night on the town.
The mysterious Inspector Rough - “is this a dream, too ?” - was played as a cheery Dickensian figure in a saucy shirt by Andrew Williams.
The fragile, frightened Bella was Keely Beresford – tense, tearful and finally, hysterically triumphant. Her fear of madness was palpable, and I was impressed by the incredulous joy with which she read the long-lost letter from her cousin.
The “dark household” was completed by the loyal Elizabeth [Madeleine Brolly] and the flighty, spiteful Nancy [Sarah Langton].
The Sheringham season continues with Perfect Wedding, Absent Friends and The Decorator.