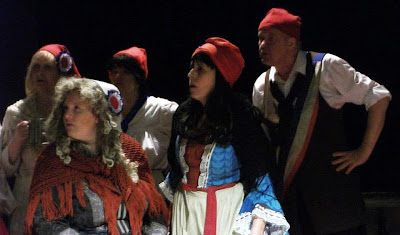 Among the shows I was sorry to miss this year was a revival of the legendary Gielgud/Rattigan adaptation of Dickens' epic masterpiece A Tale of Two Cities. So I was particularly glad to try this home-grown version done for the New Venture Players by their secretary, Janet Oliver.
No fewer than thirty-three scenes, and sixteen named characters, plus as many anonymous guards, lawyers, drinkers and tricoteuses …
The sweep of the novel is reflected in the staging, with an uncluttered multi-level acting area, and some lovely pen-and-ink slides [Dennis Foster] to keep the audience clued up.
Dickens himself appears to tell the tale [Vernon Keeble-Watson obscured by a beard and wig] and the author's spirit was alive in several characterizations – James Biddles as Jarvis Lorry, Ian Russell's Stryver, Janet Oliver's doughty Miss Pross, Alex Muckersie's Defarges, Lin Pollitt very strong as his fanatical wife, and in one of the few comedy roles in this story, Dennis Foster as Jerry Cruncher, looking for all the world like a caricature from Phiz. He had the best boots, too.
The two young men at the heart of the intrigue were Richard Spong's anguished aristocrat and Neil Gray's lawyer's clerk, who made a fine job of the famous closing lines.
Two problems have to be solved for a convincing adaptation of this work – how the French should speak [Dickens himself struggled here, but Allo Allo is probably better avoided] and how to handle the scene changes. We needed more pace, more music, fewer slow fades to black, and more energy from the actors. The tavern, and the trial, could have been set much earlier, for example.
But the journey from Shooters' Hill to the guillotine, the struggles of the revolutionaries, Carton's sacrifice and the tragic fate of the Manettes are the very stuff of drama, even if this production fell somewhat short of Dickens' vision.
on Wednesday, October 30, 2013 No comments:

Back for a fourth visit to Chelmsford Cathedral, this remarkable ensemble [average age 71] brings years of experience and dedicated service to their music-making. The packed aisles bore witness to their well-deserved popularity.
This time out, they began with a Salvationist favourite, The Liberator, and ended with a clap-along Radetzky March.
Solo showcases included Leroy Anderson's Buglers' Holiday, Purcell's Fairest Isle for cornet and Chopin's Tristesse for Euphonium. And there were nationalistic arrangements of Holst's Thaxted and Sibelius's Finlandia.
One of the most enjoyable works was the less familiar Songs of the Seasons, a depiction of the passing year through hymns and Gospel songs.
The Fellowship band was conducted by Bandmaster Ken Hillson.

There are free concerts every Friday lunchtime in the Cathedral. Highlights before the Christmas special on December 6 include the ever-popular Forest School Big Band [November 8] and, on the day of Benjamin Britten's centenary [November 22], Friday Afternoons, with the Cathedral Choir and local children.
on Wednesday, October 30, 2013 No comments: 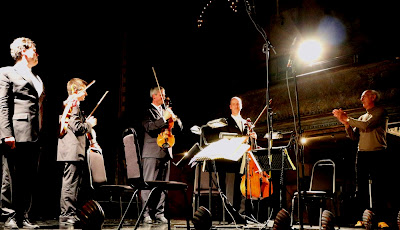 Taking advantage of the vampire Count's night off [Mark Bruce's dance Dracula is in residence at Wilton's this month] the Kreutzer Quartet with the fifth of their programmes based around Beethoven's opus 18 set.
Curated by their leader, Peter Sheppard Skærved, this sequence looked at lightness, and elegance both in surface and in structure.
Two guests this time: Emily Beynon, one of our finest flautists, and composer Edward Cowie, whose "In Flight Music" received its world première in the new version for 2013.
Like much of his work, this intricately crafted quartet draws inspiration from the natural world. In this case Australia for the Hang Gliders – the first violin soaring over running, fluttering figures, with a delicate descent at the end. France for the Hummingbird Hawk Moths, a scherzo with a hint of the salon in the trills, and again an unexpectedly throwaway ending. The Dordogne for raptors gliding on thermals, reminiscent of the hang gliders of the opening, with graceful glissandi to finish. The substantial slow movement, Vapour Trails, was an ethereal meditation with the legato melody often given to cello or viola, and pizzicato sometimes shadowing the tune.
The Cowie was surrounded by a variety of works from Mozart as well as Beethoven. No airiness in Beethoven's E minor Prelude and [very forceful] Fugue for two violins and cello. The creative empathy that binds these four players was especially evident in Beethoven's A Major quartet [no. 5 of the opus 18 set]: elegantly athletic, with a jovial rustic march in the Andante.
A wonderful affinity, too, between violin and flute for the joyful G major duo, much appreciated by the enthusiastic Wilton's crowd.
Beynon also gave us two Mozart Flute Quartets – the A Major K295, its theme and variation treating the soloist like a coloratura soprano, and, to end the evening, the familiar K285 in D Major, the spicy joie de vivre of the outer movements separated by the sorbet Adagio, an exquisite flute line over pizzicato strings.
Wilton's has a fine acoustic for chamber music, adding bloom without blurring contours. The place was packed for this most satisfying programme; the last in the series is on November 12. 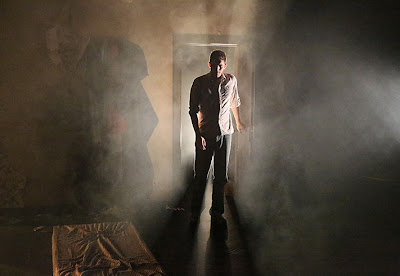 AS YOU LIKE IT
at the New Wolsey Theatre Ipswich

My fourth As You Like It this season; by far the most inventive, and in some ways the most magical.
For this anarchic adaptation, director Douglas Rintoul draws inspiration from his time at Calais's No Borders camp for migrants hoping to enter the UK. We hardly need reminding of the desperate lengths such fugitives will go to as they escape fighting, or famine, or seek their fortune.
One such is Fisayo Akinade's refugee, who tells us, prologue-like, of life in the camp, and of his love for Shakespeare, and this play especially. He is perfecting his English by memorising All The World's A Stage. He is reluctant to see As You Like It performed – it could never be as he imagined it – but agrees to continue if all nine migrants will take part …
Is it a measure of Shakespeare's genius, or Rintoul's, that so much of the play fits the circumstances so well ? Fleeing dictatorship, exile in Arden, Aliena's very name, liberty [not banishment]. These rough sleepers are brothers in exile; Orlando is welcome to their table, though he had thought all things savage there.
The style of the piece [designed by Hayley Grindle] heavily reinforces this unusual setting. A drab room, crammed with thin mattresses, peeling paper on the walls, an unseen helicopter circling overhead, shadowy figures lurking along corridors.
The music – the songs [was that Adele, was that Chris Barber?] are very effectively lip-synched, Colin Michael Carmichael an eager Touchstone – and the gloomy lighting gives an enchanting filmic quality to many of the scenes.
The actors reflect the disparate nature of the concept – this production opened in Luxembourg before crossing the channel – and the delivery of the lines was not always ideal. Nothing to do with the linguistic origins of the actor: the Celia of Anna Elijasz [from Poland] is one of the most successful, and she makes a lovely slut Audrey, too, getting what few laughs are going here. Michael Fox's Orlando lacks charisma, though, and Mark Jax, as Jaques, struggles to make his melancholy stand out from the sombre mood of the rest. Elisabet Johannesdottir [Iceland] makes a convincing Ganymede; her cross-dressed seduction is nicely done. And Akinade, as well as his introduction and a halting epilogue, gives us William and a lovely Warwickshire Silvius.
The grim setting leaches almost all the pastoral gaiety from this dark, deliberately-paced production [the "no woman" quartet a lively exception] which might have benefited from a leaner text. And I wonder what the [impeccably behaved] schoolchildren in the front row made of it all. Old hands will have Michael Bryant's apple-crunching Jaques to look back on, or this year's Rosalind on the lake. But I'm not sure I would like this haunting, thoughtful vision to be my first walk in the Forest of Arden ...