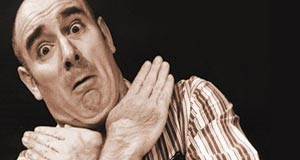 UNDER MILK WOOD
Guy Masterson
at the Civic Theatre
20.01.12

Guy Masterson has been carrying Llareggub around with him for something approaching twenty years. All the people of Dylan Thomas's sleepy seaside town, living inside his head, ready to spring to life in this remarkable theatrical experience. Now his one-man show must take a rest, and Friday's performance, to a near-capacity Civic, will be the last for some years.
It is a play for voices, and we discover the Welsh town first through the keen ears of sightless Captain Cat, standing in pyjamas and dark glasses on a kitchen chair isolated on a bible-black stage, as the men and women dream their revealing dreams. And the animals, too: moles, cats, carthorses and the rest. All vividly but economically suggested in a masterclass of narrative mime. Masterson's instruments are his mellifluous voice, aided by echo occasionally, and his eloquent hands. With them he conjures the characters and the moulted feathers of their dreams. The music and the soundscape [Matt Clifford] are helpful, but incidental.
The delights are legion – many of us, like the couple behind me, wait in pleasurable anticipation for our favourite lines, first learned in versions by Burton or by the poet himself. Like the awful Pughs, or Cherry Owen's cheerfully drunken homecoming, or the children's games, blithely skipping, shyly kissing on Llareggub Hill.

THE WIZARD OF OZ 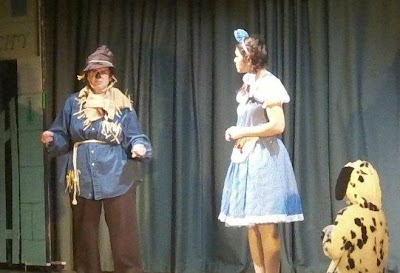 THE WIZARD OF OZ
Galleywood Theatre Group
at the Keene Hall
22.01.12

Kansas comes to the Keene Hall in Galleywood, for the last of this season's pantos, James Barry's re-working of The Wizard of Oz.
Baum's old morality tale works well as a panto, with its witches, Munchkins and ding-dong battle between good and evil.
But the cast had to work hard to push out their performances over the excited hubbub of Sunday's matinée - most successful were Beverley Eary's brainless Scarecrow, Annette Michael's Wicked Witch, and, impressively, understudy Caroline Bradley making the most of her sidekick Riff Raff at only a few hours' notice.
The songs ranged from Sound of Music to S Club 7, via Paloma Faith, with only a nod to Over the Rainbow, recast by MD Joanne Cocklin, and nicely delivered by Lisa Manuel, a likeable, lively Dorothy. There was some deft dance work – the monkeys in the ghost routine – the design, though basic, did have some lovely poisoned poppies. Scene changes – of which there were many – would have benefited from some bold musical backing.
Debbi Flack's family-friendly show featured performers across the age range, from Abbi Flack's tiny Toto to Jean Speller's timorous Lion. A real community effort. 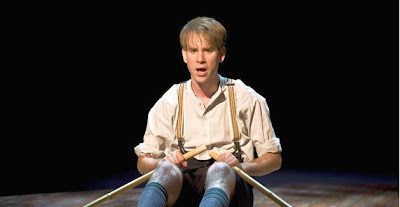 Books for children sit well on the stage. Bold characters, lively dialogue and fast-paced plotting draw the audience in and keep them engrossed in the action.
Swallows and Amazons is one of the latest, off on the road again after its festive run in the West End. Given the creative team behind this Bristol Old Vic production – Helen [Coram Boy] Edmundson for the book, Neil [Divine Comedy] Hannon for the score and Tom [War Horse] Morris directing – it's no surprise that this turns out to be a marvellous show, true to Ransome's classic novel, brilliantly brought to life.
Pleased I waited for the Chichester date; my £10 seat [roughly where prompt corner would be on a proscenium stage] afforded me an excellent view of the open waters of the thrust, with the full-sized mast suspended above ready to swoop down for the dénouement. The staging was endlessly inventive. The telescope portholes, the reeds turned boathouse, the actors donning faded blue overalls to take their turn as musicians or stage hands. Wind and spray for the Swallow in full sail, a feather duster and secateurs for Polly the Parrot. One of the high points was what Shakespeare might have called a masque: Titty's "fanciful, fictional" dream of pirate plunder.
The music was not memorable, but it was wonderful to see a charcoal-burner stooping over the bellows as he played his fiddle, with one of the Amazons on piano and Mrs Walker on bass for Let's Make The Most Of It, a lively upbeat pastiche.
The show is a hymn to the power of children's playful imagination: the town becomes Rio, grown-ups Barbarians. And at the end, a fun-filled finale, with foam missiles, slomo fighting and the grown-ups pitching in and playing the game, Captain Flint walking his own plank before the children vow to return next summer, and the two boats sail off, hand to hand, over the shark-infested audience.
A strong ensemble – all the children played, Blue Remembered Hills fashion, by adults – with outstanding work from Akiya Henry as Titty, whose reminiscence sparks the action, and Stewart Wright as Roger the ship's boy, a convincing seven-year-old despite his burly frame and full beard. 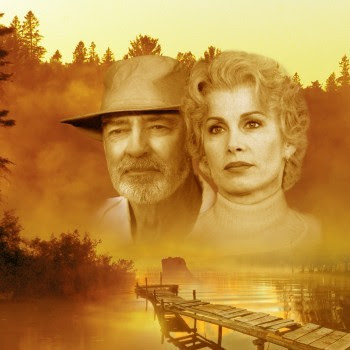 ON GOLDEN POND
Middle Ground at the Mercury Theatre Colchester
17.01.2012
for The Public Reviews

It's thirty years or more since we first saw the Thayer's New England lodge by the lake.
Ernest Thompson's play [predating the famous Fonda film] has aged well, adding a patina of period charm to its gentle, sentimental exploration of a marriage in its twilight years.

Norman and Ethel [she's "old", he's "ancient"] take the dust wraps off the furniture for the 48th time, with the whole summer ahead of them, remembering the neighbours, listening to the loons, with only death or dementia to look forward to. That is until their daughter Chelsea finds her dentist, with his teenage son in tow …

This brand new production, directed and designed by Michael Lunney for Middle Ground, catches the style and the mood very well, helped by some lovely haunting music for piano, oboe and violin [specially written by Lynette Webster and Tessa Frith] and by the Maine summer home itself, open plan, wooden, with a nice lived-in look to it. Not so sure about the backcloth with those cliché scudding clouds – a more impressionistic view of the lake might have been more effective.

The two household names playing Darby and Joan here both give touchingly believable performances. Richard Johnson plays the chronically cantankerous, slightly confused, tough old buzzard Norman to perfection, with Stephanie Powers as his long-suffering Ethel. Placid, loving, with the inner strength she needs to cope. Their final scene, where they confront mortality and close up the house for another winter, is memorably moving.

And there is strong support from a terrific cast. Elizabeth Carling is the grown-up daughter, haunted by a miserable childhood. Her new man [Tom Roberts] has a wonderful scene with Johnson, the older man determined to wrong-foot his guest. And there's a lovely character cameo from Kasper Michaels as the mailman with the ludicrous laugh, Chelsea's childhood sweetheart. The young boy, who gives Norman a new lease of life while widening his vocabulary, is convincingly done by Graeme Dalling, who played Huck at the Mercury in 2010.

It's not Chekhov; its dialogue and characters have more than a hint of the sitcom. But it is a very enjoyable piece of theatre, well served in this fine revival. The first night audience in Colchester gave it a very warm reception, which augurs well for its three-month national tour.

ALI BABA and the songs of ABBA

ALI BABA and the songs of ABBA
Little Waltham Drama Group
at the Memorial Hall
15.01.12 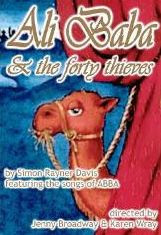 Mamma Mia ! It's a panto packed with Abba hits, re-written to suit the plot of Ali Baba and the four tie thieves.
It's a gem of an idea – not always easy to judge how well it was implemented, since the lyrics were often swamped by the excellent band. What we needed was a few of those 70s hand-held microphones …
The book, by Simon Rayner Davis, was full of fun with money [fittingly] and hoary old chestnuts which kept drummer Colin Turner busy on the boom boom cues. Key to a good panto performer is confidence in the material and complicity with the audience, and it was pleasing to note that some of the most successful here were the youngsters: Hannah Walker as slave girl Morgiana, and Alex Lee as her Abba Baba ["I do, I do"]. In a large cast, space only to mention Reggie Mental Tie [Heather France], Linda Burrows as Rough Ralph, Susan Butler as [One-Eye] Maid Earlier – she had the best pseudonym, too: Duke Aaron Attention. And of course panto recidivist Richard Butler as Mustapha Tinkle.
In a series of splendid frocks, Mike Lee made a really good Rum Baba, with his gravelly Tommy Cooper tones and a good sense of timing [an immaculate pause at the end of the ghost routine]. All the costumes were excellent; the designs too – palm tree proscenium pieces and a lovely picture-book interior .
This unusual Ali Baba was directed by Jenny Broadway and Karen Wray.
on Friday, January 20, 2012 No comments: 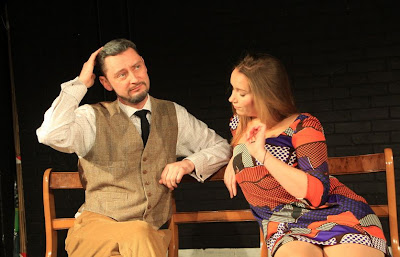 Not easy, playing farce. How much more difficult for this early Bennett, where the farce, hilarious as it is with its comic-postcard characters, is just a facade, a front for a deeper piece altogether.
Janet Tomkins' production for Full Circle went at it with the simplest staging and admirable pace – three chairs, no waiting.
The quick-fire dialogue meant that some of the wit was lost – always a problem with Bennett - and sometimes the poignancy of the poetry was drowned in effects, like the pier-end piece with its glove puppets and surreal soundscape, or the wartime verses.
But the quality of the writing, and energetic work from the younger actors especially, made this an enjoyable evening. And some things worked really well – the "Liverpool" double take, the Buffalo number. But no excuse for trousers dropped clumsily – a staple of any farce worth its salt.
Dhugal Fulton was a watchable doctor, effortlessly mastering the style and the wordy passages, with Amanda Whiteford imposing as his wardrobe of a wife. Kate Austen was excellent as the dowdy daughter; David Anderson's Dennis was amusing, though too dim and too demotic for my taste. Penelope Lambton wrung every laugh out of Mrs Swabb, the omniscient chorus who pulls the whole farrago together, and Jeremy Battersby worked hard at the Priest with Five Fingers, audaciously steering his Chopper across the Cramphorn stage. Though his reading was camper and coarser than necessary, I felt.
The cast was completed by Teri Levett's snooty Delia, Emmy van Beek as her nubile daughter, Christopher Poke as the falsie fitter, Alan Thorley as the depressed Purdue [the actual hanging left to our imagination] and David Johnson as the four-foot Casanova Sir Percy Shorter.
on Friday, January 20, 2012 No comments: