Eric Ashley’s arts review of 1986
for the Essex Chronicle 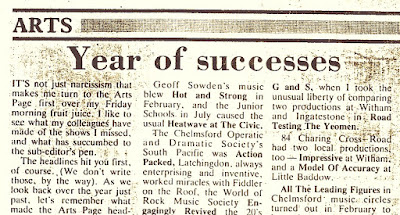 It’s not just narcissism that makes me turn to the Arts Page first over my Friday morning fruit juice.
I like to see what my colleagues have made of the shows I missed, and what has succumbed to the sub-editor’s pen.
The headlines hit you first, of course. (We don’t write those, by the way.)
As we look back over the year just past let’s remember what made the Arts Page headlines in I 986. from Busy Year Ahead in the first issue to Sad It's Over in the last.
It was a year of successes at the box office, with Syd Lawrence Packed Again and Sell-out Fun for Young Gcn‘s Follow The Star.
Geoff Sowden's music blew Hot and Strong in February. and the Junior Schools in July caused the usual Heatwave at The Civic. The Chelmsford Operatic and Dramatic Society's South Pacific was Action Packed. Latchingdon, always enterprising and inventive, worked miracles with Fiddler on the Roof, the World of Rock Music Socicty Engagingly Revived the 20s musical Mr Cinders,  and the dependable Moulsham Lodge played Key for Two At Spanking Pace while another review of the same farce was headlined Laughing Stock.
ln May there was a clash of G and S, when I took the unusual liberty of 'comparing' two productions at Witham and lngatestone in Road Testing the Yeomen.
84 Charing Cross Road had two local productions too - Impressive at Witham and a Model Of Accuracy at Little Baddow.
All The Leading Figures in Chelmsford music circles turned out in February to hear the superb Bochmann Quartet. They appeared again in Great Waltham last month as part of Andrew Fardell‘s Benjamin Britten concert, which also blended singers, soloists, orchestra and audience into Stirring Synthesis in the cantata Saint Nicolas.
Troupe‘s Home was One of The Best in 20 Years, at the Mercury studio, and Red Shift's The Double was a Unique Experience at the Fold, Billericay. The Cream Of Societies previewed Robert and Elizabeth at the Civic before taking it to the Waterford Festival.
John Jordan made a rare public appearance in a Celebrity Recital in Chelmsford Cathedral, just after a week of inspired work At the Festival. including many nationally and internationally famous figures. Christopher Fry was commissioned to write a new play for the autumn Drama Festival. The result was Caedmon, which provided some truly Memorable Moments in the Cathedral.
Welcome Visit referred to a performance in the Cramphorn by The Twins and I, but it could equally well have introduced any one of a number of small-scale tours which came to the Civic’s studio auditorium — the controversial Joy Riders, Charlie Brown from the Mercury, and Snap's Far From The Madding Crowd which showed how successful an adaptation of a classic novel can he.
Chelmsford Theatre Workshop had a Challenging Year - surely one of their most successful ever, culminating in the Rapturously Received Amadeus, preceded by The Glass Menagerie, Ghosts , and Present Laughter, not to mention Lark Rise, which allowed us to Eavesdrop on a Tiny Hamlet in July.