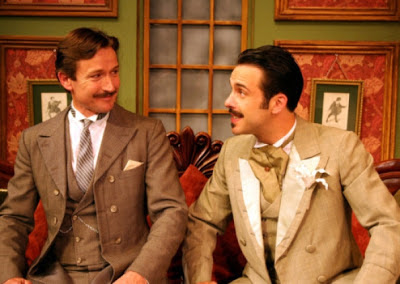 THE IMPORTANCE OF BEING EARNEST
Middle Ground Theatre Company
at the Mercury Theatre Colchester
22.10.2012
for The Public Reviews

This Middle Ground tour of Oscar's greatest hit has been around for a year or two. Last time, if memory serves, it had Tony Britton in it.

No such legends this time out, but a cast including many names from stage and the small screen, who together gave us a workmanlike, if ultimately uninspired, canter through the lapidary text.

It certainly looks good – the scenery is imposing: a lovely cloth of City of London churches for Act One, a classical garden for Act Two, a country house library, with the same horticultural backdrop, for Act Three. And the frocks were superb – Gwendolen's reticule, Aunt Augusta's formidable hats typical of the care lavished on these Edwardian outfits. And there's a lovely original score from Mat Larkin, featuring the violin of Lynette Webster.

As Miss Fairfax so rightly points out, style not sincerity is the vital thing. And it's not so much the farcical misunderstandings that lie at the heart of this piece, but the polished wit, bons mots and aphorisms. Not everyone is equally skilled at pointing a witty riposte, or indeed at timing the lines to extract every laugh from the willing audience.

It is perhaps a generation thing. Diane Fletcher's elegant Lady Bracknell is a true delight. Her inability to bring herself to pronounce the word "handbag" is a masterstroke, and even a line like "the unfashionable side" is imbued with deep shades of significance. David Gooderson is a game old parson, charmingly pursuing the prim Miss Prism of Sarah Thomas, and we are treated to a double domestic helping of Gerry Hinks, who gives us a suavely lugubrious Lane and a doddery, distracted Merriman.

In the opening scene, Algie [Jim Alexander] and Jack [Tom Butcher], resplendent in spats and moustaches, run through the dialogue at a spanking pace, with some lack of clarity. The objects of their affections, amusing in the garden duologue, sometimes come across more as the "purple of commerce" than the "ranks of the aristocracy" – a question of poise, deportment and subtlety.

On opening night at the Mercury, we hear mostly ripples of laughter, rather than gales. But the audience seems to enjoy this fitfully diverting revival of this most bankable of classic comedies.

Email ThisBlogThis!Share to TwitterShare to FacebookShare to Pinterest
Labels: .middle ground theatre company, colchester mercury, the importance of being earnest 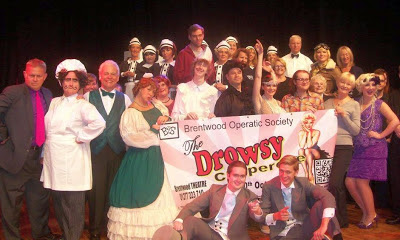 Follies, of course, Forbidden Broadway, and, my favourite, Songbook, by Monty Norman [the "record" is on my shelves, man in the armchair, is it on yours ?}. They're all more or less affectionate spoofs of the great American musical. But none is as clever, or as spiritedly witty, as The Drowsy Chaperone.

The unique feature of this glorious pastiche is the framing device of a Broadway anorak – a very recognizable type, I'm sure I used to know this guy – sitting in his lonely apartment with his spider plant and his record player. In Jacob Allan's cheerfully camp production for Brentwood Operatic we have Ian Southgate, scarcely middle-aged, but otherwise perfect as the apologist for this 1920s froth. He helps with the plot, gives footnotes on the stars, mouths the words, and gets more and more involved in the cheesy routines. And along the way reveals a little of his own life.
The show – his first love, though he's never seen it live, is this delicious confection, whipped up to a traditional recipe. You'll recognize the ingredients: mistaken identities, dream sequences, spit takes, a Broadway impresario and his Follies, a suave British butler, comic gangsters, an airhead chorus girl. He plays the LP, a gift from his mother, and the performance comes to life before our eyes, right there in his room.
The performers successfully recreated the feel and the falseness of the genre. The Chaperone herself, glass in hand, wearing the second worst wig, was perfectly embodied by Nina Jerram – her rousing anthem to alcoholism a highlight of a constantly delightful production. The bride and groom were Juliet Thomas and Samuel Cousins – his dance duo with Best Man Dan Glock was impressively done. Amongst many other memorable creations, space only to mention the unlikely pairing of Mandi Threadgold-Smith and Jordon Cox as the gangster pastrycooks, Martin Harris as the Latin Lover, and Rebecca Toft outstanding in the relatively small role of the Aviatrix. The MD was Jonathan Sands.
We never quite forget that this is a show in one geek's mind. His kitchen cupboard conceals props, his bed is pressed into service, his LP skips a groove and a power cut spoils the climax. "I should start again from the beginning …" he muses. And such was the feel-good magic of the piece and the production [the absence of a tap routine the only disappointment], we'd have been quite happy for him to do just that...
on Thursday, October 25, 2012 No comments:

THE LONELINESS OF THE LONG DISTANCE RUNNER 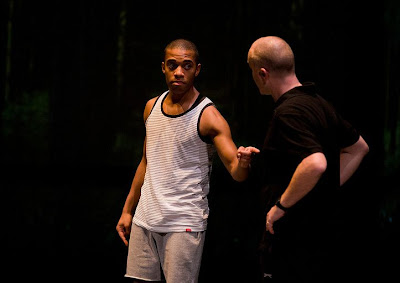 THE LONELINESS OF THE LONG DISTANCE RUNNER
Pilot Theatre and York Theatre Royal
at the New Wolsey Theatre Ipswich
16.10.2012
for The Public Reviews

Half a century since that angry young man Sillitoe saw his seminal story filmed. It's all about class, that curse of British society. The disparity of opportunity, and of aspiration, between rich and poor, haves and have-nots.

This is not a problem which has gone away, but society and its tribes have become more complex than we could have imagined back then.

So Roy Williams has his work cut out to set his adaptation in 2012, in the shadow of the Olympics, the riots and Cameron's coalition.

But though it has a very different feel from the original, a shift of perspective, perhaps, the anger is still there, and this hard-hitting production remains fiercely faithful to the passionate intensity of the short story.

Director Marcus Romer is helped by a remarkably effective set and an excellent acting company.

Two massive screens form a backdrop; on them we see projected surreal images, the private thoughts in the mind of the runner. Through them we glimpse the world outside the YOI: family, friends, authority figures who then join the protagonist centre stage for key moments in his life story. And across the stage, a nine-foot treadmill, on which Colin Smith really runs while delivering his many monologues. He's running the race in real time, with flashbacks and memories from within his mind. So no interval – we have to match his pace in this marathon.

He is played with very convincing attitude by Elliot Barnes-Worrell. We sense his frustration, the innate intelligence struggling to find expression. His final existential choice still has the power to shock and provoke debate.

Influences for the good in his life include his dying father, dreaming of socialism [Richard Pepple, who also gives us a loathsome fancy-man], and first girlfriend Kenisha, sincerely played by Savannah Gordon-Liburd. But not Stevens, an outwardly well-meaning man from the Home Office. Superbly characterized by Dominic Gately, he tries to get down with the troubled Colin, encouraging him to run, and then to race, until at the critical moment his true feelings are revealed.

Strong support from Jack McMullen as a feckless friend, and Doreene Blackstock as Colin's Mum.

An impressive revival, even if the updating sometimes jarred. Hard to believe, in 2012, in an athletic competition between Borstal and Public School. Or in a cash box carelessly left in a branch of Greggs. The street patois elicited giggles from the many youngsters in the theatre, and this version will probably date faster that Sillitoe's story. The central metaphor, though, is as telling as ever, with the troubled youngster running to escape, to find himself. "All that counts is what I think," he tells us. "I'm a long-distance runner. That's it."