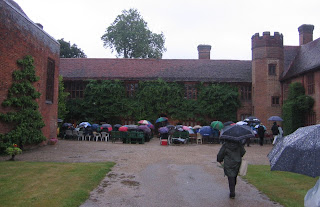 This was only the second open-air Shakespeare I've seen at Ingatestone. Both occasions were damp, I'm afraid.

But Theatre Set-Up refused to let the rain spoil their show, and four score hardy souls sat in the wet to watch a good workmanlike production of this problem play.

Lavishly costumed in traditional style, the actors coped well with the space and the elements. Richard Plumley was a convincing Bertram, immature and weak of will. Terry Ashe gave good value as the “gallant militarist” Parolles, and the “foul-mouthed” clown Lavache, with his little jester's doll, was brought to life by Peter Lundie Wager. Elizabeth Arends played an affecting Helena, making the most of her heart-felt speeches. Diana, central to the “bed-trick” which effects the denouement, was an elegant Kyra Williams. Terry Eddington had great presence as the ailing King, and Tony Portacio was the “scurvy Lord” Lafeu.

The company's founder and artistic director, Wendy MacPhee, played the Countess, the Widow, and the Psaltery – atmospheric music after Dowland.

Especially in the great outdoors, a little more broad comedy would have been welcome, and some of the words were lost to the wind and the walls of Tudor brick – Ingatestone Hall standing in for the Castle of Roussillon.

But it was moving to reflect that years before Shakespeare penned this comedy, John Petre's ancestor had built his fine manor house, which made such a fitting backdrop to this “mingled yarn”. 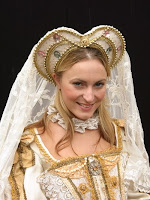