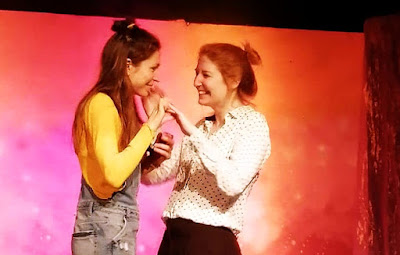 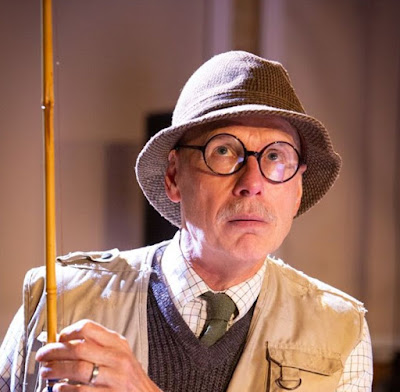 The opening of a new Eastern Angles tour is always an event. But this show uniquely so – a closed-door premiere before the production is moth-balled till next year. A real privilege, but a pleasure tinged with sadness, to be part of a very small audience for this first and last night.
Arthur [Swallows and Amazons] Ransome married Trotsky’s secretary ? And played chess with Lenin ? George [Animal Farm] Orwell joined the Indian Police in Burma straight from school ? His villainous pig is called César in the French edition ?
Much more plausible, surely, to think that these two “strange bedfellows”, united by a love of fishing and the coast of East Anglia, should have crossed paths more than once.
That’s the premise of Ivan Cutting’s fascinating drama, set mostly in Southwold.
The young Eric Blair is discovered stowing away like Goldilocks in the cabin of the Selina King. In his pocket Coming Up for Air, and two ferryman pennies to see his late father across not Blyth but Styx. And thus begins a prickly relationship which endures through the war, follows the Ransomes to the lakes and Orwell to his end in a London sanatorium.
The two writers tie flies and talk angling – a powerful subtext links the sport with spying - “Will it fool the smartest fish in the brook ?” “None of us reveals our true colours; otherwise we’d be swallowed like the fly”. The catalyst for much of the ill-feeling between them is Evgenia, given a compelling characterization here by Sally Ann Burnett. She is deeply mistrustful of the “idle scalliwag”, who seems suspiciously interested in her former life with the Bolsheviks. But a curious empathy develops between them, and she finally shares the story of the diamond petticoat.
Philip Gill is a perfect embodiment of the author in the twilight of his career. Plus-fours, waders, just as you’d imagine this “cross between Worzel Gummidge and Bertie Wooster”. Cutting’s evocation of their unlikely, but clearly fond, relationship is compellingly written, and sympathetically performed here. But there are darker depths to him, too, secrets and lies …
As the younger writer, still with his name to make, hoping for tips on writing “as if for children”, Laurie Coldwell skilfully suggests the eventful path that brought him through Burma and the Spanish Civil War to Southwold Harbour. There’s an almost mystical feeling to some of the scenes the two men share.
Many characters remain tantalizingly out of sight: the much-maligned Harbourmaster, the literary lions at Orwell’s bedside, Reilly [Ace of Spies].
And then there’s the Girl in the Woods. Something of an obsession for Orwell [“some women call me George”], and not only on the page [we see, for example, Comstock’s condom setback from Keep the Aspidistra Flying]. They are all done, in fleeting flashback, by Freya Evans, who also gets a more substantial role in the closing pages, as the capable Sonia, who marries George and takes charge of his affairs up to his death, and beyond.
Ian Teague’s design places the new boat - “varnish barely dry” - on a floor of bright stylised waves, with the red-streaked sky of the title behind. And she ingeniously unpacks to form the jetty, the houses and the hospital as the narrative unfolds.
The traverse staging brings impact to scenes which might otherwise seem static, with Nicola Pollard’s fluent direction giving us a plethora of significant stage pictures as the actors react and regroup: the opening confrontation with the penknife, the midnight chat in the air raid, Ransome the “dried-up old duffer”, struggling with his autobiography, relaxing with his back to the water, Evgenia facing the two writers, the older couple closer in the uncomfortable surroundings of the clinic.
It’s quite a cerebral piece, with a lot of exposition. But these cracking characters - the famous men and their almost unknown women – hold our attention throughout the two hours, with their talk of secret agents, ailments, war and peace, escapes and betrayals, dystopia in 1984, utopia on Coniston ...