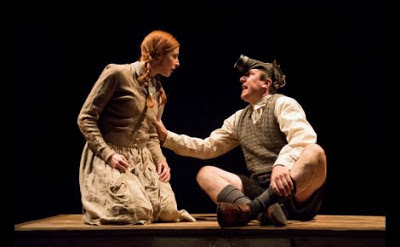 Sheds are the in thing this spring. "John Clare's" shed on tour with Eastern Angles, the garden shed at the Mercury for Ayckbourn's Intimate Exchanges, and, prominent on the South Bank, the National bright red Shed, standing in for the Cottesloe while it becomes the Dorfman.

The first of the shows within its rough-and-ready walls is Table, a new play by Tanya Ronder, directed by Rufus Norris.

The premise is a strong one. A kitchen table, centre stage for almost all of the action, is handed down through five generations, picking up stains and scars along the way.

Lovingly, the table is waxed and polished as the audience finds its way into The Shed. Two actors feel the grain of the wood. "Want to see a coffin scratch ?" - leopard claws, mad nun's nails …

Birth, death, sex, war – the table top has seen them all, and so have we, with the economy of writing, brief scenes, of the first part somewhat dissipated by indulgent lingering after the interval with the hippies [very amusingly done, especially Michael Shaeffer's Julian] who scar Gideon in the 60s. Played persuasively by Paul Hilton, he's the unlikely offspring of a missionary nun Sarah [Rosalie Craig] and the man who saves her life by shooting the leopard under the table [also Hilton].

While the language is often jarringly contemporary – "what does that even mean..." "random" – Norris's stylish production is frequently magical: the use of hymns and music hall songs, the amputation of the legs, and the children, notably Sophie Wu's Su Lin, the next generation, 9 year old surrogate daughter of Gideon's gay son Anthony [Jonathan Cullen], and Albert as a boy, beautifully characterized by Daniel Cerqueira.
And if the piece feels improvisatory, unfinished even, with no clear direction except Ikea, it is a fascinating suggestion of how an inanimate object can chart our history, even have a life of its own …

I'd like to give it 3/4 of a star more. I liked the idea, the actors were excellent, but I just felt it needed a bit/lot more work before it became a good play. But Philip Larkin would have approved.