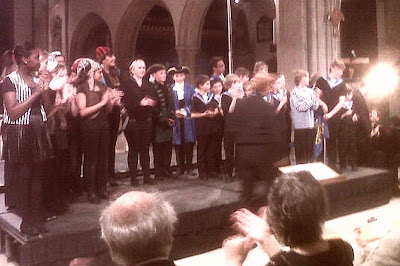 The first of two Britten-themed concerts this week; before the might of Our Hunting Fathers in Norwich, music for treble voices in Chelmsford Cathedral.
The boys and girls of the Cathedral's music department shone in a varied programme, mixing the sacred and the secular, early works and late.
The concert headliner was The Golden Vanity, a miniature cantata cum opera for treble voices, drum and piano. Delightfully semi-staged in the Cathedral, with colourful costumes, it saw the pirate girls defeated at the hands of the gallant shipmate boys, thanks to the heroic sacrifice of a humble cabin boy. Though it must be fun to sing, it is not easy music, and the choirs rose spectacularly to the challenge of performing it all from memory. Director of Music James Davy conducting discreetly from his seat in the front row. Excellent solo work, too, from Alice Drain and Martha Pothen amongst the Turks, and Charlie Abbott as the Captain of the Vanity, Lucas Whipps as his Bosun, and William Keeler [no stranger to the dramatic stage] as the plucky Cabin Boy.

We also heard the complete Friday Afternoons, including a lovely version of the familiar New Year Carol, and a lively rendition of Jazz Man.

Another early work, the Corpus Christi Carol, was preceded by the Missa Brevis of 1959, which is sung every year by the combined choirs as part of the liturgy. A very impressive performance, with a rich, bright Sanctus at its heart.
The concert was conducted by James Davy, with Oliver Waterer at the organ and the piano, and Jacob Ewens beating the dramatic drum for The Golden Vanity.

More Britten from our Cathedral on July 6, including Saint Nicolas and the Soirées Musicales.

thanks to Michael Ryley for the photograph
no clip from the concert - though I think I spotted microphones - but here is a version of the Golden Vanity by the Ely boys ...