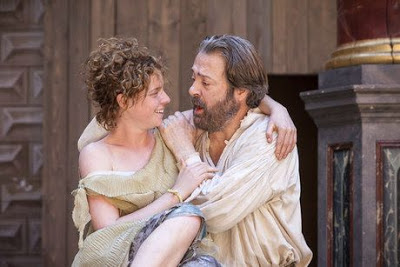 Not the first Tempest to strike the Globe – the first had a great Caliban [Jasper Britton] and a sad disappointment for Prospero. Their next was clever, but confusing and not always magical. Third time lucky this year, I'd say, with a cast strong in depth and a clear, honest production by Jeremy Herrin.
Prospero is Roger Allam, who took this space by storm last season with his Falstaff, and seems equally at home, almost relaxed, on this magical island. Not much of a philosopher, perhaps, or a magus, but a wonderfully tender father to Jessie Buckley's wide-eyed Miranda. He brings some welcome wit to the role, too, and has already developed his own way of dealing with the ever-intrusive helicopters.
There is a bigger model boat, but mercifully little stage design, though the Globe's wooden O is echoed in a generous extension into the yard, and there's a long staircase up to a platform in front of the musicians' gallery. [Stephen Warbeck the composer this time.]
Caliban is another Globe favourite, James Garnon, wearing little more than body paint, but physically impressive, and able to still the packed house with The Isle is Full of Noises. Colin Morgan makes an ethereal Ariel, using the building for some spectacular parkour. And plenty of belly laughs for the groundlings thanks to Trevor Fox's Geordie Trinculo and Sam Cox's drunken butler.
But it is Allam's island, and his final staff-breaking farewell is masterly.

Email ThisBlogThis!Share to TwitterShare to FacebookShare to Pinterest
Labels: shakespeares globe, THE TEMPEST