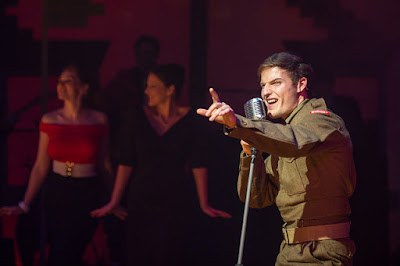 ROLL OVER BEETHOVEN
at the Queen's Theatre Hornchurch

Can't get to see Sherlock's Sweet Prince ? Here's Hornchurch's home-grown Johnny Hamlet in a real-deal rock-and-roll re-working of Shakespeare. And while Cumberbatch has only Nat King Cole on his phonograph, the Queen's offers a whole juke-box full of familiar sounds from the Fifties, raucously filling the gap between skiffle and the Mersey beat.
Bob Eaton's audaciously imagined version transfers the action to England in the monochrome 1950s – a very atmospheric opening scene – variously in Denmark Street [London's Tin Pan Alley], a grim Clacton holiday camp, and the Elsinor Ballroom. The hits of the day are re-packaged as clever pastiche. And we have a lovely happy ending, the duel scuppered by a flick-knife comb, in which Gertie and Claud [Antony Reed], Hamlet and Ophelia, not to mention those lovely boys Larry and [Waltzer] Horace [Daniel Healey], all face a bright harmonious future.
Matt Devitt's classy production gives the rather patchy piece a tremendous world première, in a stark set by Rodney Ford – Escher battlements in silhouette, on closer inspection a skeletal street-scene façade. The music, under Ben Goddard, is superbly realised, with the actor-musicians impressively recreating the styles and the sounds of sixty years ago. The Ghost on washboard, Hamlet's uncle on muted trumpet, sax duos from his mother and his girl, and so on.
The most successful numbers, perhaps, are the social comment songs: Smoke Gets Everywhere, and the Great Pretenders, evoking an age when everyone smoked, and “queers” – including the helpfully named Stephen Spender – stayed firmly in the closet. Elsewhere the lyrics, like the cod blank verse, are often lame and clunky, or perhaps deliberately naff: “I'll never forget tonight / You gave us a helluva fright.” “My mind is out of joint and that's a fact / I'll be a nutter by the second act.” And the Ghost Train number is ill-conceived and embarrassingly staged.
Excellent performances largely paper over the cracks though, not least Cameron Jones's energetic Hamlet – his Elvis number, All Mucked Up [bowdlerised until the very last repeat] is brilliantly done. The Ghost of Hamlet's Father is done with relish by Fred Broom. He has a lot to do here, appearing, as in Britten's Death in Venice [Ben another unlikely name check], in various disguises, waiter, Butlin's redcoat ... Stephen Markwick, often heard here as MD, shows comic potential as the stick-in-the-mud Henry Polonius.
Outstanding work from the two women: Sarah Mahony's Gertie delivers a superb Love and Understanding, and newcomer Lucy Wells is a striking Ophelia with a Jayne Mansfield figure. It is Ophelia who has the suicidal thoughts here, her Freudian ocean dream explored in the nicely conceived Sea of Troubles. Her Heartbreak Hotel [A Camp Called Misery], duetting with Jones, is strongly characterized, too. Another new face, Tom Sowinski, is the posh music student Larry, who finds freedom with Waltzer in the streets of Soho.
Roll Over Beethoven is the latest in a fine Hornchurch tradition of fun, populist re-workings of the Shakespeare canon. And, whether or not you're familiar with the five-act original, it provides an enjoyable trip back to the era of Johnny Remember Me, culminating in a brilliant rock-style Beethoven's Ninth, with Broom as the toe-tapping statue of Ludwig Van. 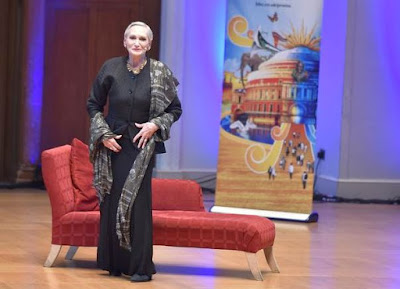 A SONDHEIM CABARET
Proms Chamber Music at the Cadogan Hall


Even in Sloane Square, Monday lunchtime is not the ideal slot for sophisticated cabaret, but if anyone could bring it off it would be Richard Sisson, pianist, composer and for many years the Widow.
He was the curator and host of this delightful tribute to Stephen Sondheim on his 85th birthday, and brought a wonderfully diverse team of talents to the Cadogan Hall stage.
Here's Jamie Parker, in his second Proms appearance this season, trying to stay calm as he tinkles Sisson's ivories, and seducing Kitty Whately Into The Woods. They're together again on the intimate chaise longue in Barcelona, and for Too Many Mornings. Even a little ironic hoofing in Rain on the Roof, also from Follies.
Anthony Brown played two contrasting sax solos – By the Sea and Send in the Clowns from A Little Night Music. Sian Phillips, a memorable Madame Armfeldt twenty years ago, revived those sepia memories in a moving evocation.
After the whole company joined in Sunday [in the Park with George], there was a lovely encore: Goodbye for Now from the movie Reds.
And those of us in the hall heard Richard Sisson and presenter Petroc Trelawny giving us some scraps from the Instructions to the Audience from Frogs, which also featured in the Sondheim Prom of 2010 …

As for applause, please,
When there's a pause, please,
Although we welcome praise,
The echo sometimes lasts for days… 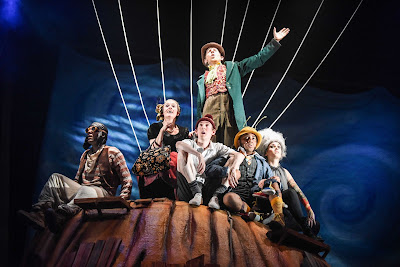 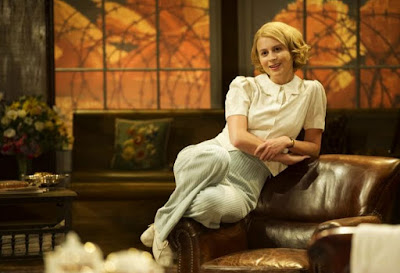 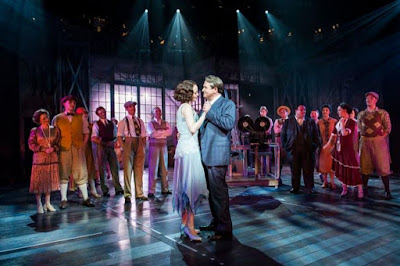 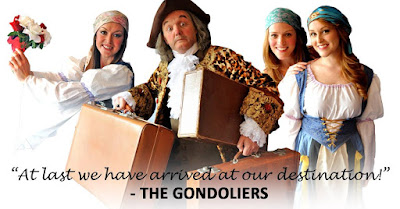 
The opening production of the 22nd Festival – three weeks of G&S from companies large and small from far and near.
Not, alas, in Matcham's Royal Hall, or in the equally delightful Harrogate Theatre, but in the comfortable, capacious but irredeemably corporate Harrogate International Centre.
The production, directed by John Savournin, was Gilbert and Sullivan as it used to be, before polymaths and auteurs were let loose on it. Traditional, predictable, enjoyable. The most amusing thing, perhaps, was the cheeky knees-up for Regular Royal Queen.
A simple, “modern” set, an excellent orchestra [MD David Steadman], a lively, smallish chorus, and some impressive soloists: Claire Lees a brilliantly sung Giannetta, an impassioned Pair of Sparkling Eyes from Robin Bailey's Marco.
The character roles were played with assured style by Sylvia Clarke as the domineering Duchess, Richard Gauntlett as her hen-pecked little Duke, and Bruce Graham as Don Alhambra – a lubricious Grand Inquisitor done up in a cardinal's costume [think George Melly as Thomas Wolsey], nothing like an undertaker at all, it has to be said, but great fun and a serious presence vocally.
on Wednesday, August 05, 2015 No comments: