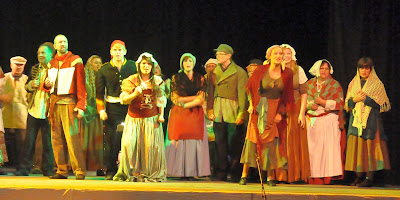 This celebration of twenty-five years of Show Hits begins with a touch of the feather duster, and a rumbustious tap-dancing Time Warp [from The Rocky Horror Show]. Fittingly, the eclectic offerings include a handful of favourites from years past, as well as plenty of new work.
For Show Hits has grown over the years, and now manages to encompass contemporary dance, mime [an inventive, complex two-hander with a twist, to Jacko's Man in the Mirror, impeccably done by Aden Gardner and Dani Hoad] a comedy sketch, and even an old novelty song from the Music Hall, The Sardine and The Sprat, revived to great acclaim by LADS veteran Robin Warnes.
But of course the meat of the miscellany still comes from the musical theatre, even if some of the numbers, like Michael Bruce's subversively naughty Portrait of a Princess [Aimee Hart] are still looking for a show.
Amongst many stand-out solos, Evie Brown, with perfect Julie Andrews vowels, in I Could Have Danced All Night, Aimee in I'm Not Afraid Of Anything, and Vicki Cumbers bringing a strong voice and dramatic presence to I Dreamed A Dream.
Excellent ensemble work in the production numbers, choreographed by Vicki Bird, assisted by Aimee Hart and Alice Tickner. The chorus is imaginatively used in Superstar [though to be honest, under lights few performers are flattered by a white top], boundless energy in a clever Travolta pairing – We Go Together and You Can't Stop The Beat, and superb performances in Bernstein's America – great frocks, strong voices and a dynamic staging powered by the upstage band, directed by Kris Rawlinson, who has brought so much to Latchingdon over the past few years. Nice to hear some polished choral singing, too – Seasons of Love [from Rent] especially.
The youngsters, who will of course provide talent for LADS over the next quarter century, have their moment of glory with numbers from Lion King, Wizard of Oz, Beauty and the Beast [Carole Hart the teapot here] and High School Musical.
The show ends on a high, with Dirty Dancing [complete with lifts!] and an electric Let The Sun Shine In for the finale and the curtain calls.
Star Hits 2013 is directed by Cathy Hallam, Mandi Tickner and Kris Rawlinson.

production photograph by John Strange
on Friday, August 30, 2013 No comments: 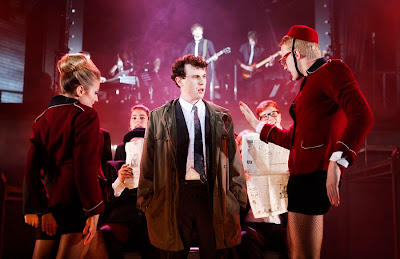 QUADROPHENIA
at the Mercury Theatre, Colchester
22.08.13
for The Public Reviews

Just one Lambretta parked up outside, its vintage RAC badge proudly displayed. And in the foyer, some stylish vintage clobber.

Quadrophenia is the first outing for the newly formed Mercury Young Company, an energetic, enthusiastic bunch of 16-25-year olds, supported and encouraged by the resident professional "made in Colchester" team, headed by director Tony Casement.

Kenneth Emson's play is a new look at the classic 1973 album. Like the film, it centres on Jimmy, a Mod who feels "let down by everything". Not much of a story, but a very effective structure, in which almost all the action is flashback, scenes played over in his mind as he languishes in the "nut-house". The staging is spare, with grey roundels and several levels. The laundrette and the train are ingeniously recreated; there's a brilliantly suggested scooter, and some evocative black-and-white photographic backgrounds, including a news montage for the Brighton riots – the Rockers are left to our imagination …

A striking climax, too, with our hero crowd-surfing up to row G – Beachy Head ? - serenaded by vocalists from amongst the audience.

Fifteen Who tunes are featured, sometimes fleetingly, sometimes, as with 5:15, as full production numbers. I recall that the original vinyl came with a glossy gatefold with all the lyrics. Should have hung on to it, since the words, sadly, were often hard to distinguish. And, while considerable effort has been made to get the costumes, even the hairstyles, right, the dialogue makes too many concessions to the 21st century – "You're all right" for "No thank you", twice, and plenty of Parental Advisory expletives.
"It's not real swearing," one mother told her shocked nine-year-old in the interval, "it's just acting."

The music, rightly, is at the heart of the show, with excellent work from Richard Reeday's eight-piece band, perched high above the action.

A compelling performance from Chris Connelly as Jimmy: he handles the numbers – I Am One, Sea and Sand, Reign O'er Me - with style and commitment. Very strong support in depth from a huge cast, including Joe Marsh as the shrink, morphing into an ancient retainer and a trolley dolly in Jimmy's fevered brain. James Clark is impressive as Mickey; Joe Boyd is Ace Face, the hero turned bell-hop. Tilly Hawkins is touching as kid sister Tracey, and Bobbi Blaza makes the most of the unattainable Debs. Lucy Davidson sings superbly as Monkey, whose kiss seems just for a moment to redeem this lost soul. The happy ending is probably illusory, though, given the dark and downbeat message of the music, and the drama.

The energy of these talented young people is palpable; this captivating Quadrophenia makes a memorably auspicious launch for this enterprising venture.