THE VIRGIN IN THE ICE 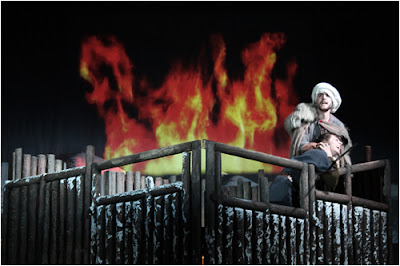 THE VIRGIN IN THE ICE
Middle Ground at the Mercury Theatre Colchester
02.05.13

Fans of Ellis Peters' Cadfael, and there are many, will often tell you that the strength of the novels is in the historical background and the narrative style, rather than the plots or the characters.
Two elements difficult to bring to the stage. Middle Ground's ambitious, and expensive, dramatisation, adapted, directed and designed by Michael Lunney, celebrates a quarter of a century of touring, but I don't think it will go down as one of their signal successes.
The magic of theatre is not best served by resorting to the projector for images and filmed inserts; it can easily look like an admission of failure.
We have a huge cast and multiple settings, trees on wheels crossing the stage like Birnam Wood. There are some striking images, the snowy abbey cloister background, or the body on the tomb, but the crucial showdown atop the tower needed more than a few flames on film. Sometimes the staging was strangely static: the final confrontation and confession was delivered by three actors standing in a line. The medieval music was well used, the soundscape often effective.
Of the performances, of varying quality and style, I found Hannah Burton's Ermina too modern, Paul Hassall's Beringar too callow. But there was good work from Daniel Murray as one of the "creatures absolutely innocent". And Gareth Thomas, mellifluous and grave, did what he could with Cadfael, who came across in this version as more interesting than those involved in the mystery proper.

Email ThisBlogThis!Share to TwitterShare to FacebookShare to Pinterest
Labels: colchester mercury, Middle Ground Theatre, THE VIRGIN IN THE ICE