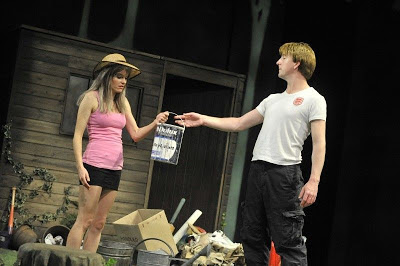 at the Mercury Theatre, Colchester
08.05.13
for The Public Reviews

Colchester gets a name-check in this third episode of Ayckbourn's Intimate Exchanges; or Camulodunum, as Boudicca might have called it. She's the subject of the pageant, and the two women in Headmaster Toby Teasdale's life are both in the frame to take the part.
Just the four main characters this time out – we'll have to wait for A Game of Golf in June to meet Miles again – but no shortage of themes, plenty of awkward moments and of course loads of laughs. Some striking imagery too – love is like malaria, marriage like a familiar flat.
In the Teasdales' back garden, laconic handyman Lionel offers to lay Celia's crazy paving, while she would really prefer a shoulder to cry on. As the ambitious, but none-too-subtle Hepplewhite, Gwynfor Jones uncannily catches the body language and the tone of the man – "Sweat's not expensive," he assures Celia.
Her home help, Sylvie dreams of domestic bliss while Lionel rolls a ciggie.[Both these rival tribal queens are played superbly by Ruth Gibson, capturing mercilessly the brittle, brisk Headmaster's wife and the gauche, bovine village domestic.]
One of the strands here is about making the most of yourself [the third scene is titled The Self-Improving Woman], and Sylvie is first coached by Lionel's Pygmalion in posture, deportment and positive thinking, and later begs to be Rita to Toby's Frank, hoping that some coaching in English literature might make her more attractive.
The main scene here, as the Pageant looms, sees Sylvie struggling with the pentameters, Celia distraught at Toby's heartless rejection, and much fun with contrasting costumes [though neither looks much like the descriptions given of them], collapsing scenery, and an ingenious catfight between the two leading ladies. Jones's Toby, who sometimes tends to caricature, did have a very effective moment of sudden self-awareness, as he realises the value of marital familiarity.
Even without the promiscuous Rowena, there's a tangled cat's-cradle of love, lust and infatuation on stage here. But the final scene, unusually optimistic for Ayckbourn, eschewing infidelity and the five-year itch, sees a village wedding, and Toby and Celia finding some common ground at last, albeit in mutually sour remembrance of things past …
The programme has useful local references both to the Warrior Queen and to Colchester's own historical pageant of 1909. And I am assured that even if you didn't see Miles emerge blinking from his shed seclusion, or Lionel serving up his cream teas, Robin Herford's production still stands as a masterclass in social comedy and quick-change characterization.

Email ThisBlogThis!Share to TwitterShare to FacebookShare to Pinterest
Labels: A PAGEANT, colchester mercury