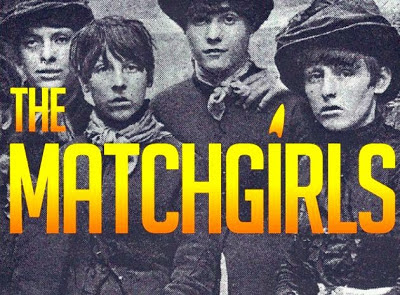 Not often you hear of the dangers of Phosphorus in a musical's opening number.
This rarity from Sixties, penned by Bill [Compo] Owen and composer Tony Russell, tells the inspiring story of the women employed by Bryant and May in Bow, who, with the help of radical writers and reformers, went on strike and made the Victorian management see sense.
An ambitious undertaking from this enterprising group. Not only because it's a forgotten work, but because director Bill Edwards has chosen to set it in the body of the hall, with a traverse acting area as well as the conventional stage, bringing the action teeming into our midst.
Huge advantages in terms of immediacy and impact, especially for those seated alongside. Which heavily outweighed the downsides: no "back row" for less confident chorus members, and some visibility problems in a few scenes.
The large company attack the work – which is not the best written musical – with enthusiasm and professionalism. The Match Girls, in particular, from the oldest to the youngest [Jenny Pavitt's little Louie], put heart and soul into recreating the spirit, and the gallows humour, of these exploited women. Their men, dockers and pigeon fanciers, bring humour and a strong physical presence. The stage pictures are often effective, the scene changes generally slick, and there are some inspired touches, like the meeting mime behind the "Waiting" number.
Some very impressive character work from the principals: Kate, leader of the strikers, torn between seeing the campaign through and seeking a better life in America, is magnificently played by Debbie Stevens; wonderfully sung, too, in This Life of Mine and many other duets and ensembles. Her Joe gets a high-impact performance from Jason Markham. Other stand-out characters include Lisa Rawlings as Polly, Amy Pudney as Winnie [with Glenys Young excellent as her mother] and Sandra Trott as Jessie, Kate's rival for Joe's affections. Colourful cameos from Linda Raymond as bibulous Old Min, and Keith Goody as pious Mr Potter.
The intellectuals – Gail Hughes as Annie Besant and Martin Herford as GBS – seem a little colourless by comparison.
Denise Jackson's choreography is lively and expressive; the music is predominantly jazz-influenced, though of course the writers couldn't resist some jolly Cockney sparrer knees-ups in the Newley/Bart/Bricusse tradition.
The band is right at the back of the hall, and MD Shirley Parrot sometimes struggles to bring her singers in. I saw a preview, and no doubt this minor issue, and the occasional lagging pace, will improve as the run continues.
In any event, a laudable revival of this neglected British musical, brought to the Blackmore stage [and the cobbles in the auditorium] with style and sparkle.
on Thursday, May 16, 2013

Email ThisBlogThis!Share to TwitterShare to FacebookShare to Pinterest
Labels: blackmore players, THE MATCHGIRLS