I WAS A RAT 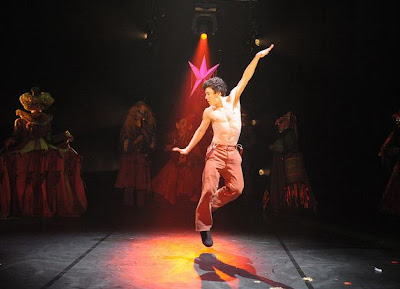 I WAS A RAT
Teatro Kismet at the Arts Theatre Cambridge
01.05.13

Inside a square of light, with no scenery, Teatro Kismet play out their richly imagined version of Pullman's story of 1999.
The fairy tale narrative is preserved – the drama begins, like the book, with a knock at the door of elderly, childless couple Bob and Joan [Tyrone Huggins and Lorna Gayle]. It's a boy in footman's livery, cheerfully claiming that he used to be a rat.

Fox Jackson-Keen is amazing as the rat boy. Puppyish, innocent and vulnerable, his performances lights up the stage. He's a great dancer and gymnast, too; he's been Billy Elliot in his time, and his back flips particularly impressed the Year Fives behind me.
Fox apart, the seven other actors all double up to play all the fairytale characters – the journos in their bottle glasses, the rats with their headlamp eyes. There's lovely Philosopher Royal, and a Dickensian Billy, who "rescues" Roger, our rat monster, just before the interval.

Like the novel, this production is targeted at the younger audience, but its magic is potent enough to cast a spell over anyone, and I would happily have crept back into the auditorium to watch it all over again ...

Email ThisBlogThis!Share to TwitterShare to FacebookShare to Pinterest
Labels: arts theatre cambridge, I WAS A RAT, teatro kismet