WHISTLE DOWN THE WIND 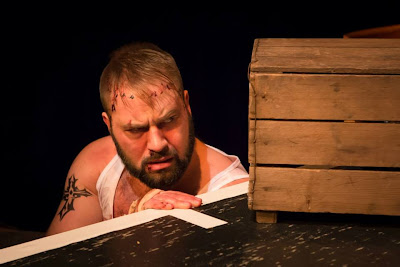 WHISTLE DOWN THE WIND
Springers at the Cramphorn Theatre
09.11.13

A far cry from Malcolm Arnold to Andrew Lloyd Webber, from Lancashire to Louisiana, where religion and innocence were both very different. But this intimate staging of Whistle Down the Wind did capture the essence of the original tale, even if we couldn't share the children's faith that their Jesus would survive the apocalyptic Christmas Bonfire.
The simple timber staging suggested barn and homestead, bold lighting took us to the tunnel and the revivalist meeting, bare feet and a fishing line effortlessly evoked the creek. The Southern drawl proved a problem; not for the first time it was the children – veterans of The Sound of Music - who mastered it best: Charlotte Golden's Brat, Matthew Scott's Poor Baby, and Katy Forkings' superb Swallow. Brilliantly cast, her slight frame so vulnerable against the bulk of The Man, her pure voice with a hint of the warm timbre of maturity.
Ian Pavelin brought honesty and huge presence to the convict Christ, struggling with his parables and his conscience; Colin Shoard gave a moving portrait of the single parent caught between his children's naivety and the lynch mob in the village.
Effective performances too from Aaron Crowe as Amos, Bethan Anderson as his Candy, and Ross Rogers as Edward, leading the cast in Cold, one of the better numbers in a patchy score. The old Lloyd Webber magic is still there, though not always well served by lacklustre lyrics.
The staging made the most of the space – the people gathering for worship at the start, the children's offerings and the adults' offensive weapons tellingly juxtaposed for the Act One finale. But when The Man was “lying low” he was invisible to most of the audience, and it was distracting to have the screens and the bike manhandled behind the action.
Whistle Down The Wind was directed by Andrew Shepherd with Fiona Lipscomb, the choreographer was Olivia Gooding, and the MD, up above the action with his excellent band, was Ian Myers.

Email ThisBlogThis!Share to TwitterShare to FacebookShare to Pinterest
Labels: cramphorn theatre, Springers, whistle down the wind