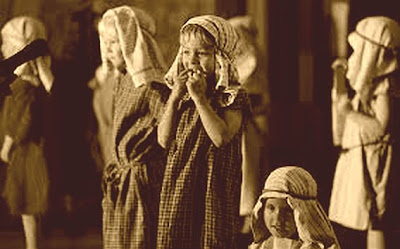 THE FLINT STREET NATIVITY
Writtle Cards at the Village Hall
28.11.13

We've all been there. Watching the little angels [and the little devils] as innkeeper, shepherds, kings and the Holy Family.
So Tim Firth's cutting comedy is onto a winner straightaway, as the plentiful laughs proved on opening night.
It's not a perfect stage play [it began life on television], and the adult epilogue struggled to relight the fire, but some fine comedy performances got under the skin of the reception-class thespians, with their rivalries, insecurities and chaotic home lives. Often sung to those familiar carol tunes, replacing the words they didn't quite manage to learn.
Impossible to credit every child [all played, Five-Go-Mad style, by grown-ups], but Daniel Curley stood out as the malevolent innkeeper, Jean Speller as the lisping Andrea, Frankincense her shibboleth, Laura Bennett as bossy Virgin 1, with five stars on the “Who's Been Good?” chart, Jodee Goodwin as her catty rival, playing Gabriel – the Annunciation was superbly done – Liz Curley as a down-to-earth shepherd with brilliant comedy timing. Not to mention Dirty Pedro, and the special needs donkey, hilariously done by Chris Rogerson.
The set, with its cereal packets and its giant chair to suggest the scale, was convincing, as were the varied costumes. Class teacher Mrs Horrocks never appears, but her tambourine spoke volumes …
The Flint Street Nativity was produced for Writtle Cards by Clare Williams, and directed by Sharon Goodwin.
on Friday, November 29, 2013