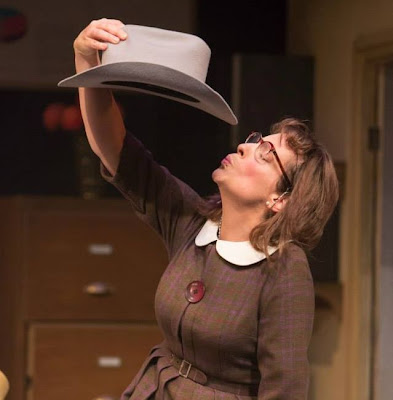 THE OPINION MAKERS
Made in Colchester at the Mercury Theatre
29.10.13
for The Public Reviews

Into the dingy basement office of Fernsby Market Research bursts its MD, just off the PanAm from the US, full of new ideas and stateside jargon.
This brand new musical comedy is set firmly in the 1960s, the design, the language, the pre-permissive society, bath buns and bathing costumes. The show itself seems almost like a throwback to that innocent era, its creators happily acknowledging the influence of the legendary Boulting Brothers. It's gentle satire, genially poking fun at lazy staff and gullible clients.
And a strong, hard-working ensemble of musical theatre and comedy stars do their best to breathe life into this unlikely saga of generic brands and product relaunches. Campbell's Lotion, used by generations as a cure for everything from diarrhoea to torpor, is to be rebranded as Gemini ...
Justin Edwards is the lanky, awkward Fernsby, crisp comic timing and laconic delivery squeezing every last laugh from the script. His mousy secretary, loyally carrying a torch for her hapless boss, is played by Mel Giedroyc, in a big-hearted, lovable performance. David Mounfield clearly enjoys his two caricatures – the Scottish snake-oil mogul with a dark secret, and a florid, pedantic MP, both given a lovely patter song.
Stacey Ghent and Benjamin Stratton are kept busy playing all the rest, including brown-overalled stage-hands who manhandle the lamppost, the office and the public bar in a triumph of scene shifting.
From the musical stage, we welcome Daniel Boys, who also gets two characters – Fernsby's other employee, frantically faking questionnaires in the Waggon and Horses, and Abramovitz, the hippy creative brought in for the relaunch. The excellent Julie Atherton is Campbell's unlikely American bride, entrusted with some of the best numbers – her seductive Thinly-Veiled Metaphor is one of the highlights of the score.
The onstage musicians are wonderful, recreating the jazzy sounds of the sixties from their onstage bandstand – Tom Kelly is the Musical Director.
But the inspiration is inconsistent. Not every number reaches the same sublime heights of ridiculousness as Airport Carousel; the paean of praise to the good old British pub, for example, is a huge disappointment. But the score is serviceable, with a good deal of enjoyable pastiche, and it's all delivered with commendable flair and enthusiasm.
Sara Perks' design is superb – the street and the office beneath, the pub, the truck for the band, even a Scottish baronial bedroom – and Daniel Buckroyd's direction is deft and pacy, skilfully recreating the comedy style we enjoyed before Carry On coarseness crept in.
The crazy plot comes home to roost with Mr Fernsby's new American ideas brought to bear on the political world, with a New Jerusalem of focus groups and consumer surveys. So that's who's to blame ...

Email ThisBlogThis!Share to TwitterShare to FacebookShare to Pinterest
Labels: colchester mercury, made in colchester, THE OPINION MAKERS