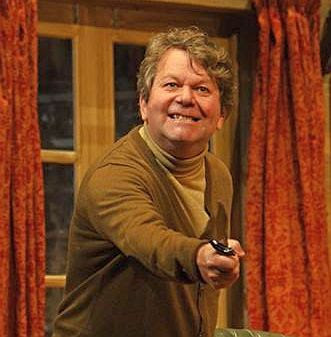 DEATHTRAP
Cut to the Chase at the Queen's Theatre, Hornchurch
28.10.13
for The Public Reviews
production photo: Nobby Clark

To judge by the gasps and shrieks from the audience, there are plenty of people for whom Ira Levin's venerable pot-boiler retains its power to shock and amuse.
So no spoilers here. Following the equally successful Sleuth, it takes the thriller-drama as its theme, in a self-referential, meta-theatrical game of twists and turns. So well crafted “even a gifted director couldn't hurt it.” Old-fashioned in the best sense – Gaslight and Dial M For Murder are both name-checked – it manages to produce goosebumps even in the most hardened aficionado ...
And it's all played out on Norman Coates's amazing set – a handsomely converted stable block in Connecticut, soaring triangles and warm wooden walls. And all the trappings we might expect – framed window-cards of triumphs past [“The Murder Game”, “Gunpoint” …] an armoury of weapons from those same shows, several of which see service in the gorier passages, heavy drapes at the french windows, the partners' desk with its Smith Corona, a man-size hearthrug, Houdini's handcuffs, and a stove to burn the evidence.
Matt Devitt plays the washed-up writer, Sidney Bruhl, who seizes the chance to revive his flagging career. A nicely developed character, his facial reactions often brilliantly expressive, as when he reads the draft of his assistant's masterwork. A Westport Macbeth almost, “in blood stepped in so far”, except that here, the wife [excellently realised by Anna Skye] has serious reservations about his bloody intentions …
The fresh-faced newcomer [Elliot Harper, looking exactly the part in his check shirt and his boots] is introduced as one of the “twerps” from the creative writing seminar – Bruhl's only source of income these days. But maybe more than he seems, his literary ambitions reaching further than life in the Welfare Office.
A key figure in the plot happens to be staying in the neighbourhood: Bibi Nerheim's dippy Dutch psychic, who feels the pain at the heart of this household and brings resolution of a kind in the last act. Completing the cast of five, not a police inspector but Simon Jessop's “dull but sharp” lawyer.
And what of the last scene – our collaborators, our partners in crime, are at a loss. “They're both dead!”. Indeed they are, but there's one last clue, one final psychic prophecy to be fulfilled ...
Devitt and Jessop are the “gifted directors” here; they must have worked on thousands of thrillers between them, and the way they manipulate the audience, massage the [deliberately] creaky plot, use music to alter the mood, is little short of masterly. Well worth a visit to 70's Connecticut at the Queen's, even if you saw Simon Russell Beale in the West End, or Michael Caine in the movie, even, dare I say, if you can't stand thrillers !


this piece first appeared on