THE PRIVATE EAR / THE PUBLIC EYE 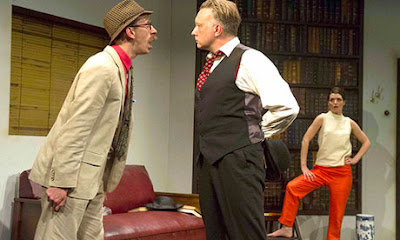 Peter Shaffer's delightful double bill was a huge hit on both sides of the Atlantic back in 1962.
We're back in the days of Ascot water heaters and coffee bars, in a theatrical landscape before the National and the kitchen sink, when revue was fashionable, and it was not unusual to enjoy two, or more, short plays in one evening.
Alastair Whatley's revival, the first in 50 years, captures the style remarkably well.
In The Public Eye, Bob lives alone in a dingy bedsit, opera posters on the wall, a curtained alcove for a wardrobe. He's geeky, shy and he comes from Warrington. But he's met this girl at a concert, and invited her back for supper. To help him with the Mateus Rosé and the [tinned] mushroom soup he's roped in Ted from the import/export office where they work.
They're as different as biscuits and cheese. Ted is cocksure, laddish, blessed with the gift of the gab. Could be Naughton's Alfie, or Orton's Mr Sloane. So it's no surprise that when Doreen turns up in her fake fur, she's more taken with the helpmate than the host, who does himself no favours by pumping Peter Grimes over the Wharfedales.
But the Behemoth stereo has another track up its LP sleeve, and the power of Puccini almost succeeds in seducing the pair of them, as she waits coyly on the bed and he sits stroking the ocelot.
This sequence is especially well done, a potent mix of the tender and the farcical.
Rupert Hill gives a bravura, amoral Ted, and Siobhan O'Kelly is excellent as the awkward guest – body language the most eloquent here.
The meal itself, a stylised fast-forward fantasy, is another highlight, with Stephen Blakely's Bob left a gooseberry at his own feast. His character is superbly observed; we can see that he desperately wants to break free from his anorak cocoon, but in the end his courage fails him, he tacitly concedes defeat to Ted, and, heart-rendingly, gouges a scratch across Madama Butterfly.
We're encouraged to see links between the two pieces, and, in a wonderfully choreographed brown-overalled ballet, the scene is changed after the interval, before our eyes – and Blakely's – as his lonely room becomes a swish accountancy practice, and, by means of a moustache, a mac and a pork-pie hat, he is reborn as a private detective.
In The Public Eye it's Julian's cross-talk with stuffy old accountant Charles [superb work from Jasper Britton] which provides the comedy gold, though it's the relationship between Charles and his young wife – very much a child of the 60s and another stylish characterization from O'Kelly – which is at the heart of the drama.
She's a free spirit, he's jealous, and it's up to Julian to heal their marriage with a cunning plan.
Shaffer has much to say about unhappiness, frustration and fidelity, but it's the beautifully judged masterclasses in farce that make these bitter-sweet period pieces such an enjoyable trip back to Shaftesbury Avenue in the Sixties.