THE BEAUTY QUEEN OF LEENANE 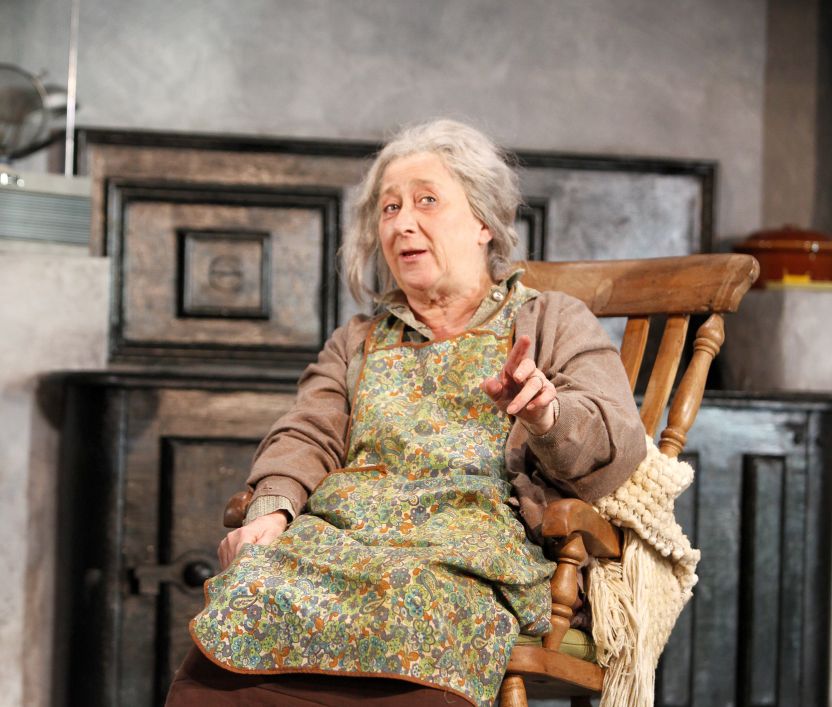 Mags and Maureen, mother and daughter, living a life of mutual loathing in remotest Connemara. A bleak backwater, brilliantly conjured up by Juliet Shillingford's realistic set: holy images, green gloss paint and rain streaming down the panes of the casement.
Rain is the tab curtain, too, a drenching downpour twice leaving the flagstones glistening.
Wryly comic at times, uncomfortably harrowing at others, the piece, from 1996, is carefully constructed, and though some of the plotting is predictable, the final dark dénouement is memorably powerful. Most impressive, perhaps, apart from these two sharply drawn characters, is the way McDonagh catches the rhythms and the idioms of the language, the repetitions and the Donegal dialect achieving an almost poetic effect.

Michele Moran gives an amazing performance as Maureen, the beauty queen of the title, totally believable as the victim of her circumstances, her character disclosing more of its dark, dangerous depths with each new revelation. Flirting with her last chance of love, staring unflinchingly into her hand mirror, dreaming of a whore's life, brazenly trying to embarrass Mags. Nora Connolly is the mother, manipulative, pathetic, and a victim in her turn. Beautifully observed, both in the geriatric minutiae of Complan and urinary infections, and in the vile vindictiveness towards her long-suffering daughter.

Two brothers visit the house. Ray, impatient and edgy, [Andrew Macklin] and the older Pato [Stephen Hogan], who's the only person here who makes any attempt to be nice: a charmer, who offers Maureen a chance of happiness and escape. His letter monologue was a masterpiece of inarticulate eloquence.

But of course we guess that Maureen will never read these outpourings, much less walk off with him into a Boston sunset. Though we could never imagine the brutal truth, made all the more striking by symbols like the suitcase, the swing-ball and the poker which is not to be sold. And the tinny transistor, tragically too late with its Delia Murphy dedication.

Paul Kerryson's direction is done with the lightest of touches; these characters are richly enough written to speak for themselves, and this fine quartet of Irish actors are wonderfully adept at bringing an era and a culture to life.

This is the third McDonagh piece Kerryson has done in Leicester, and the second Mercury/Curve collaboration this year; a success to match that of the Hired Man. It's a fruitful arrangement which is surely the way forward for our regional producing houses.

this piece first appeared on