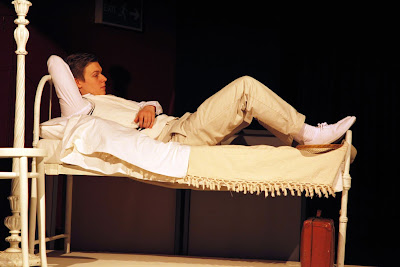 BRITTEN'S GOT TALENT
A Chamber Musical with cabaret songs


What better birthday celebration for Baron Britten of Aldeburgh than this irreverent musical comedy by Suffolk writer Robin Brooks ?

Despite the flippant, catch-penny title, there's plenty of food for thought to be savoured along with the birthday cake, mixed in with the silliness and the cabaret songs.
Not, alas, Ben's own cabaret songs, to Auden's verses, but workmanlike, clever little numbers from Damian Evans: “At Home in Aldeburgh”, “Pacifism” and the keynote quartet “Britten is Blessed”.
The musical oeuvre, generally, is in short supply. In one final black comedy moment, it's that Mahler Adagietto on the Lido that proves the final straw for this “silly old heart”. The finale, though, has the composer conducting his Young Person's Guide, coincidentally the closing music for Bennett's Habit of Art, which covers some of the same uneven ground.
Brooks has imagined a compelling drama, a dreamscape of the Kafka kind, where time flows in all directions and the shadow of a mysterious “tribunal” hangs over Britten's head.
So there are anachronistic pops at The Scallop, and a scathingly witty critique of Grimes on the Beach.
The Dirk Bogarde deckchair is not the only reference to Death in Venice. There's a mysterious, and very versatile, Death figure, done with some relish by Sam Dale. Like the baritone in the opera, he's a sort of ferryman, and the barber who speaks of the sickness driving people away, not from La Serenissima, but from Suffolk's “Notting Hill on Sea”.
The piece has a lovely central performance from Keith Hill as Britten. He catches exactly the boyish enthusiasm, the innocent sense of fun, the insecurities - “ping-pong and the piano: all done on the nerves” - and the relentless pursuit of youthful beauty.
The young Polish boy who embodies that beauty [excellently acted and sung by Sam Bell, alternating the role with Theo Christie] shares several key scenes with Ben – and in this play he does speak to the child – ducks and drakes, fear of the storm, swimming in the chilly North Sea, but not going in too deep, or too far …
Death apart, the characters are all drawn more or less directly from life: Pears with his college scarf [Jonathan Hansler], Miss Hudson the housekeeper [Hansler again], and Charles Mackerras with his salty Australian gossip about “The Twilight of the Sods”. David Hemmings is quoted but not named. Other characters are an amalgam – the rejected librettist with his science-fiction opera and his version of Mansfield Park, and the tragic Marcus, who hangs himself before his wedding and comes back, in cricket whites, to haunt Ben who's sleeping in the boy's old room at Mallards. One of the most affecting aspects of the drama, this, beautifully played by Joseph Reed as the boy grown too old, thrown over for a new tennis partner … As he tells us, he speaks for all Britten's boys. Joy, his mother [Gilian Cally] and Sir James his disapproving father, also represent many members of the Aldeburgh society with its ambivalent attitudes.

A brief mention for the programme, one of the cheapest and classiest in recent memory, based on the Letts schoolboy diary that Ben famously used well into his twenties.

Not everything works, not all the numbers are as sharply scored as they might be. And it would help to be up to speed on Britten and all his works. But the concept is great, and a clutch of fine performances from the cast of six makes this a uniquely affectionate tribute to this most famous son of Suffolk.