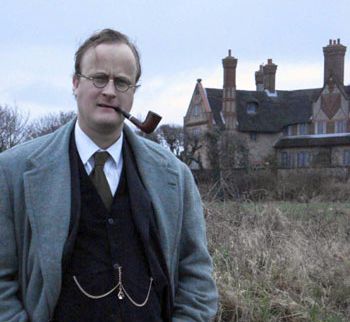 We've forgotten the power of candlelight to chill and to enchant.

This simple, potent device is exploited by R M Lloyd Parry, whose one-man storytelling shows recreate the King's Cambridge room where M R James [to whom he bears an uncanny resemblance] first told his classic stories of the supernatural.

The simple staging, most of it in deep, eerie shadow, allows us to concentrate on the words; each story sounds fresh and spontaneous, as if we had been invited to listen to it for the first time of telling.

The Ash Tree is a creepy tale of witches and revenge, which takes place around the Suffolk country house of Castringham Hall. Lloyd Parry, candlelight glistening on his spectacles, economically suggests glimpsing the creature, finding the corpse, opening the coffin. And the counter-tenor and lute – Black Is The Colour – is an inspired choice of music to set the mood.

The second story, also set in East Anglia, is the more famous Whistle and I'll Come to You, a more subtle, far scarier affair altogether, with golf and archaeology on the Suffolk coast as a background to the terror.

A tour-de-force of the story-teller's art, and I'd certainly travel to hear him again, perhaps in a more suitably spooky setting. Hemingford Grey, maybe, or Suffolk's Otley Hall, or the Leper Chapel in Cambridge ...