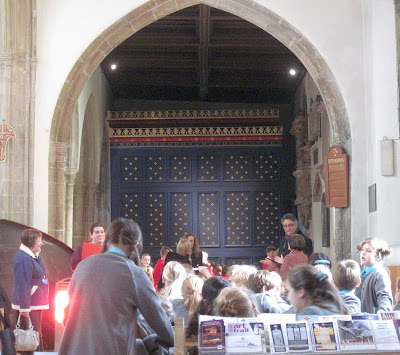 In the largest event of the worldwide celebrations of Benjamin Britten's 100th birthday, thousands of young people from Australia to the USA performed his Friday Afternoons set of songs.
Chelmsford Cathedral hosted choirs from St Cedd's School and the Cathedral Primary School, as well as its own choirs, under self-confessed “Britten nut” James Davy, the Master of the Music.
Some of the songs were performed by the choristers alone – they first performed them back in May – such as Eleanor Farjeon's Jazz Man, or Cuckoo!, beautifully phrased. For others, the three choirs joined as one – There Was A Monkey, and A Tragic Story [the Thackeray trifle about the sage and his pigtail].
The Cathedral School brought two songs celebrating Britten's love of nature, and St Cedd's contributed a jazzy setting of Now Thank We All Our God by Alexander L'Estrange, himself once a chorister …