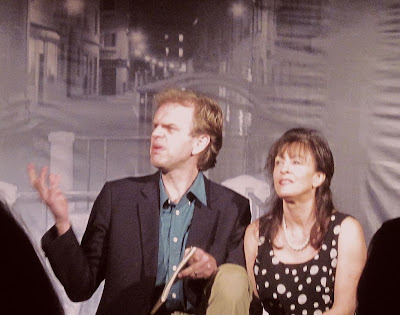 
Du Maurier's short story made a controversial, cult film. It does not transfer quite so well to the stage.
Neil Leyshon's version has countless short scenes, making it hard to establish a mood.
But Chris Plumridge's production for Greville did achieve several effective moments, and told the story, such as it is, with admirable economy and clarity.
The grey stage and the monochrome backdrop focused attention on the characters, and the action moved swiftly from hotel to canal-side to cathedral; a minimum of furniture was swiftly reset – and could have been done in low light rather than black.
“There are things out there that we can't see ...”. “Don't look now!” is a recurrent refrain. The psychic powers in this tale are not confined to the two mysterious sisters, but seem to be shared by the outwardly stoical John, bringing Laura back to Venice ten years after their honeymoon, desperate to come to terms with the loss of their young daughter to meningitis.
Like Aschenbach, he's repeatedly warned to leave the city, a danger to tourists suggested but hushed up by authorities fearful of their profits.
Adam Thompson ably suggested the conflict within his character, although he appears to be written as more stiff-upper lip, colonial-old-school than he came across here; a more expressionless, buttoned-up characterization might have made a better contrast with Carol Parradine's needy Laura, agonising over her lost daughter and her young son, lying sick back at school in England. Parradine's performance was gripping, a moving mixture of guilt and grief.
Excellent work too from the Old Ladies – Marcia Baldry-Bryan and Jan Ford – who did much to conjure the sad, sinister atmosphere. Mixed fortunes, though, for the Italian character roles which provide local colour and move the plot along.
The sound – salon musicians, ghostly voices – enhanced the production; the hallucinated voices in the nightmare sequence were less successful, partly because they were not well reproduced. Better, surely, to have the actors do this live, perhaps turning away for the “unreal” lines. I'm sure the production would have liked to use more sophisticated lighting, and it would have helped to create the dark alley, say, or to keep the weird sisters in sombre shadow.
I liked the red-cloaked figure on the staircase, though the final effect was compromised by not having a tiny shape luring John to his death. The Act One ending was genuinely chilling, and the triptych of grief, which occurs twice, was beautifully realized.