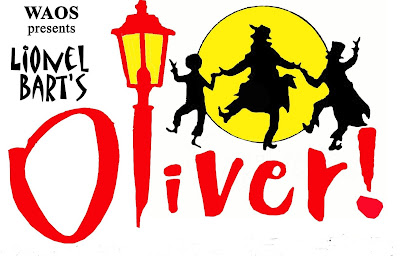 Against a splendid period London panorama, the big ensembles were a highlight of Vikki Mundell-Poole's lively Oliver! for WAOS.
The well-drilled orphans [part-singing and fancy footwork] in their subdued uniforms, dreaming of Food, Glorious Food as the Beadle's feast was carried past under their noses; most of London's lowlife crowding the stage for Consider Yourself, with a Punch and Judy show squeezing in stage right; the different levels cleverly used for the cheeky knees-up in the Cripples; the maids with brooms for Who Will Buy; the tattered brollies for I'd Do Anything. All with pin-sharp choreography and tight ensemble singing.
Charlie Smith made an engaging Oliver [though perhaps not “in proportion”], excellent in Who Will Buy, and a plucky match for nasty Noah Claypole [Edward Tunningley]. If I were a starving urchin, though, I think I might have tucked in to that apple, and to hell with diction …
Fagin – convincing hair, beard and East London accent – was George Lambeth, at his best in the reflective Reviewing the Situation, his musings nicely matched by Sandy Tate's clarinet.
Robyn Harrington sang beautifully as Nancy, and stayed firmly in character throughout her big number.
Underworld characters Dodger and Sykes were confidently done by Max Lenoir and Patrick Willis – Lenoir with cocky charm, Willis with gravel-voiced menace and a casually violent manner. Qualities not shared by Maisie, his affectionate attack dog – though, like the chorus, she was well trained and gave a very professional performance.
A large supporting cast included Liz Watson and Tim Clarke as the disgraced workhouse management, Richard Herring and Deborah Anderson as the funeral directors, Alice Tunningley as young Bet, Ron Howe and Emma Loring as the charitable Brownlow and Bedwin, and Stewart Adkins giving a consummate character cameo as Grimwig.
A very effective, versatile staging, with the double death of Nancy and her Bill one of many striking stage pictures.
The band, under MD Geoff Osborne, were on top form throughout, and while we might have welcomed more extrovert energy all round, this was a most enjoyable reminder of Lionel Bart's one and only hit show.
on Sunday, November 03, 2013