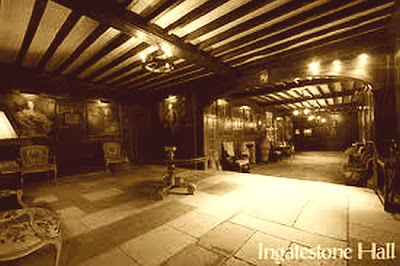 Did Bram Stoker ever see Ingatestone Hall, on his way from Dublin to Golders Green [via Whitby] ?
His classic Gothic horror Dracula has been popular on stage for many years, but this site-specific production, using Liz Lochhead's free adaptation, must be one of the most unusual. And thankfully light on fangs and gore.
We sit in the long, narrow gallery, watching rapt as the simple staging, fluently directed by Amy Clayton, tells the chilling tale, moving swiftly from Carfax to London to Hungary and back again. A company including many of the very best local actors ensure an unforgettable encounter with Paul Sparrowham's Doctor Seward [Julie Salter his sluttish nurse], Justin Cartledge's innocent Harker, the deranged Renfield [excellently done by Darren Matthews], the powerful Carpathian Count himself [an imposing Lionel Bishop], Alan Thorley's vampire hunter, and three seductive succubi …
Clayton herself plays a great Florrie the Maid [not in the original], and the two sisters who are the object of Dracula's predations are played as very modern young ladies by Hayley Webber and Laura Newton.
Flickering candlelight, ancient panelling, solid furniture and the remote setting add an extra thrill to this inventive version of a familiar chiller – just the thing for Halloween.

An ambitious Halloween choice for Early Doors Productions. Liz Lochhead's imaginative reworking of Bram Stoker's story, itself almost a classic now. And, well outside their studio theatre comfort zone, the atmospheric sixteenth century gallery of Ingatestone Hall. Is that a “Tudor chimney breast” ???
This rather wordy version is perhaps a little long for this venue, but it is well served by an excellent cast, working in a small acting area, lit by hundreds of candles and a few carefully placed lamps.
Central in every sense is the padded cell – a small cage in this production – inhabited by Renfield, one of the patients in the madhouse of Dr Seward [a powerful performance from Paul Sparrowham]. Impressively played by Darren Matthews, Renfield has some excellent speeches, raving and railing in “moon talk and baby babble”.
The Count himself is Lionel Bishop. Palpable stage presence, an aura of evil, and that hypnotic voice “library dust on every syllable”. His beautifully timed entrance stage right, his imposing figure framed in the doorway are typical of a meticulous, memorable performance. Innocent Jonty Harker, the lawyer lured to Dracula's lair by a property deal and then detained there, is Justin Cartledge; Alan Thorley brings gravitas and energy to the crucial vampire-slayer Van Helsing.
Lochhead makes Lucy and Mina sisters, and I might have expected her to make them more interesting as characters. But they are well played here, Hayley Webber as the playful teenager [excellent as a vampire, too] and Laura-Leigh Newton as the bride-to-be. It's the servants who get the best of it: Julie Salter as GriceSeward's nasty, feisty assistant in the asylum, and the show's director, Amy Clayton, superb as Florrie, the maidservant, another canny invention of Lochhead's.


The historic setting comes at a cost: not everything is audible, or visible – Renfield in his cage is a disembodied voice for most of the capacity audience.
But certainly worth it for the frisson of footsteps on the stone flags, the brush of the Count's heavy cloak, the ancestors staring in disbelief from the walls and those candles lighting the dark wooden panelling.
This is a nightmarish, often erotic, vision, dwelling on blood, blackness and bats, dreams and the immortal soul. The soundscape [the baying, screaming “children of the night”], and the music, enhance the atmosphere further.
And outside, in the gloom of the Hall's courtyard, nine tombstones, each engraved with the name of an actor and their part in the dark, demonic drama of Dracula.
on Friday, November 01, 2013