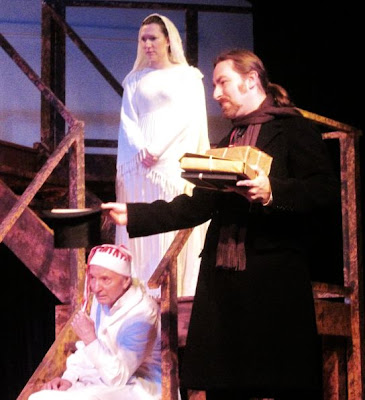 A CHRISTMAS CAROL
Little Baddow Drama at the Memorial Hall
20.11.13

Jim Hutchon was at the first night -

Alison Woollard’s refreshing version of A Christmas Carol took the Little Baddow Players back to basics, and stripped out much of the dross that has accumulated on this classic over the years. With a simple, soaring set – a trademark of the director – they were able to create spectacular tableaux punctuating the action.
John Peregrine’s Scrooge revelled in his badness, though his conversion from “Bah Humbug” to “Go buy a turkey” was a bit sudden. His nephew, Fred (Paul Bonnici) was persuasive. Especially convincing was Steve Holding, who speaks with his eyes, as the ‘umble Cratchit. Ken Rolf, too, every inch the jovial Victorian gentleman, shone a new light on the Fezziwig’s family dance sequence. And Jeff Green was compelling enough as Marley’s ghost to put shivers down my spine.
The children were at the heart of the production, Matthew Turner as Young Scrooge, Alex Dale-Doczy as Oscar, Lily Beer as Cratchit’s daughter and, especially, small, frail-looking Steven Turner, struggling manfully with his crutch as Tiny Tim.
The play was shot through with all the good nature of a well-organised village production, in the Ambridge tradition (but a bit more convincing). The costumes were superb, the ensemble work by the large, unwieldy cast was totally in character and, joy of joys, an actual real, live, violinist, Anton Archer, to squeeze the last dregs of melodrama out of the production.
on Saturday, November 23, 2013

There were Brechtian influences galore in Alison Woollard's cosy production of the familiar story adapted by John Bush. This stripped it down to essentials, telling the tale with economy. Brian Greatrex's magnificent building of the set including a dominant staircase, a mocked -up bed and a door which came and went as needed.
Anton Archer's mournful violin rendition of Where Shall We Be In A Hundred Years From Now? set the scene for Scrooge's office with its barely guttering candles and even more sparsely furnished with charity.
The action sped along at a gallop through Scrooge's youth and adulthood as he learned his lessons from the ghosts of his past, present and future. John Peregrine made a highly effective miser through to his cheerful transformation while the lovely Vicky Tropman created a series of lively characters.
Other eyecatching performers included Chloe Wiles's Belle and Martha Cratchitt; Jeff Green's Ghost of Jacob Marley; plus Ruth Carden's Christmas Past and Fred's Wife.
The only drawback to this entertaining evening of seasonal theatre came from the physical dimensions of the hall's stage. This meant that there was a lot of cross interference with the cast from the very efficient stage crew which was caused by the necessity of turning back on themselves to get furniture offstage left.
But still an evening of enjoyment for the audience.